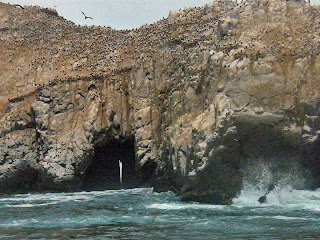 Bet you were confused about the original title of this series of blogs. My "weight loss plan" didn't start at the beginning of the trip, but on this day. We did a pelagic trip. Peru is well known for phenomanal pelagic (that is deep sea) birding. The cold Humboldt current skirts the Peruvian coast, causing an upwelling of sea life, ie. food. This of course brings in the birds.

When we were planning the trip, Martin was ecstatic at the idea of doing a pelagic. These Peruvian trips are so exciting, I even was very enthused. I had sworn to myself that I would never set foot on a boat again after the last Texas pelagic I went on. Our pelagics can be grim. You can go all day and only see a handful, if even that, of sea birds. Combine that with a penchant for seasickness, and its hard to get worked up. The last trip had been particulary bad. But this was Peru! There would be bazillions of birds! And I had heard the seas sometimes were very calm! And I was going to try the scopolamine patch! It would all be great!

It really was great at first. We left out of Callao right at dawn. I was picking up life birds even before we got on the boat. Belcher's, Gray and Kelp Gulls were zipping around. Inca Terns were just as beautiful as their photos. Peruvian Pelicans sailed over head. We took a small dinghy out to the boat, which looked great. We settled in on the bow after a quick breakfast of coffee and sandwichs. The coffee tasted great. We set out and I was feeling wonderful. Unlike the boats I have taken pelagic trips on in the Gulf of Mexico, this one didn't reek of fish and diesel. The sea breeze felt wonderful. We quickly added Great Grebe and Peruvian Booby to our list.

One of my most wanted birds for Peru was Humboldt Penguin. I had never seen any penguin, other than in the zoo. I knew that my chances of getting to Antarctica were less than nil, so this was probably my only shot.  I wasn't disappointed! We passed a rocky island and there were a handful of the penguins, looking just like they do in the movies. I was delighted! There were also South American Sea Lions and many boobies and cormorants. Gunnar Engblom, who is the head of Kolibri Expeditions, was on the boat. He told me we would see even more on the way back in.

Shortly after we passed the islands, we began seeing large numbers of Sooty Shearwaters. Then a bird that I would have thought was an alcid if I had been on the North American Coast, landed and immediatly disappeared below the surface, a Peruvian Diving Petrel. I spotted several more. They have a very distinct flight style. After that the albatross started to arrive.  I believe the first for me was Waved, but I also saw White-capped and Black-browed. Elliots (White-vented) Storm-petrels were pretty common.  My lifer Chilean Skua bullied its way through. Then we had Ringed Storm-petrel, which I was very excited about. Gunnar promised to look for a whale for me, as I still had never seen one.

Then it happened. I noticed the coffee that had tasted so good earlier was kind of sitting a little funny. The sea was a bit rougher and we were getting a little spray on the bow. Martin and the others went to the top of the boat. I decided to stay put, moving to the middle to try to avoid too much spray. I took a little drink of water and that was the end of my pleasant sea trip. I will not go further in describing what happened. I ended up sleeping some, which helped, at least while I was sleeping. I missed some birds, but at that point I don't think I would have cared if an Ivory-billed Woodpecker flew onto the deck.

At one point I heard Martin say "That Albatross has a yellow bill" My reaction was "Well, thats just great for the albatross!" I had no idea that it was significant. Martin and Gunnar photographed the bird and later a second bird that also had a yellow bill. They turned out to be Chatham Island Albatrosses, birds that breed only on a small rocky island called the Pyramid, east of New Zealand. I did not go out to see them, much to my dismay when I was feeling more like myself. Later in the day Gunnar called for me to come out on deck. I was able to drag myself to the door just in time to see the spouting of a Blue Whale. It was VERY impressive, even in my state. It looked like a geyser shooting straight up.

By the end of the day I was feeling much better. I did resume my birding and enjoyed the show. We cruised by the islands Gunnar had mentioned that morning, and were able to see huge numbers of sea birds. The penguins were thick on several of the small rocky islands. The number of Peruvian Boobies was staggering. A Surf Cinclodes was picking along the ledges.  I was really glad I had not been smelling those islands earlier in the day. The skyline of Lima was beautifully lit in the late sun. Despite my mal de mer, I managed to get 20 life birds.

We hustled off the boat, as we had an interior flight to catch. Dan, Martin and I, along with Kathy and Jens, were flying north for the second section of our tour. We had to say goodbye to Brian, Tom and Doug. I had really enjoyed birding with them and would miss their friendly joking. They were heading back to the states. We also said goodbye to Julio, who had been our second driver. I was going to miss his cooking! Alex, our guide, had skipped the pelagic. He met us at the airport and continued with us on our flight to Chiclayo.

26 species on a pelagic is not too shabby for someone that was almost dying in the middle...Glad you survived Sheridan..
The patches did not work, huh? I thought they were fool proof.