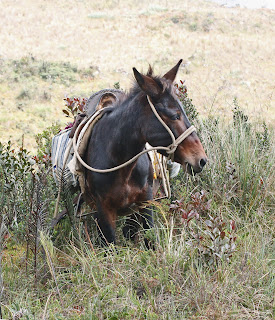 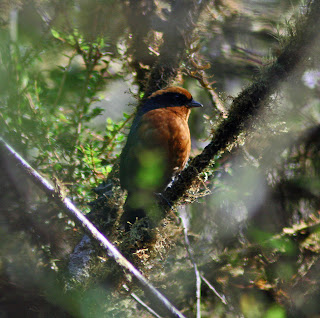 This was our day to visit Bosque Unchog. This site was one of the reasons we adjusted the amount of time we were spending in Peru. Its a very reliable place for Golden-backed Mountain Tanager, the last of the  Buthraupis that Martin needed. Its not an easy bird to find. These woods are also home to Rufous-browed Hemispingus, Pardusco and Bay-vented Cotingas, along with a number of other birds. Its at a fairly high elevation, about 3,600 meters, just under 12,000 ft.

The bosque is a bit distant from "civilisation" so we had to leave the hotelvery early. Since I had some difficulty with hiking the day before, we made last minute arrangements to have a horse for me. We arrived at the site, but there was no horse to be seen. Alex said we could start down and the man with the horse would catch up. We could hear snipe calling in the fields below us. We started on the trail just as the sun was coming up. It was a little chilly, but not bad. The sky was partly cloudy. We started down and I wasn't having too much trouble keeping up.

The mountain-tanager is sometimes seen close to the beginning of the trail, but we were not so lucky this day. We did see a number of birds as we walked. At the start of the trail we had a singing Line-fronted Canastero. Tyrian Metaltails, a hummingbird we have seen many times, were around, but we were thrilled to see Coppery Metaltails. A Sword-billed Hummingbird flew in, always a great bird to see.  The forest itself was very interesting. Because of the altitude, the trees are small and many were covered in mosses. There was still no sign of the horse, so I worked my way down, only slightly slower than the group, catching up when they stopped for birds.

The first big thrill we had was when a dark rusty and black bird flew across the path, a Rufous-browed Hemispingus. This can be a very difficult bird to see, missed by many birders that come to the bosque. I was very happy with the brief, but good look, but we were really lucky in that this guy was a show off! He came in very close and allowed photos. Even better, he was followed by a second bird. We were all in an euphoric state,  higher than the altitude. Even if we didn't see another bird, we would have been happy.  We pushed on.

We quickly added Pardusco to the day list. This tanager is not exactly a looker, but its another bird that can be missed. We kept scanning for a big golden bird, but didn't have any luck in that department. We did have Scarlet-bellied Mountain-Tanagers, which were not new for us, but gorgeous birds anyway. We finally arrived at an area where Alex had seen the Golden-backed Mountain-Tanager in the past. The weather was pleasant. We all worked hard scanning and listening.

We were kind of spread out on a hillside, overlooking the forest. Martin and I, were further down the hill. We saw Bryan, Tom and Doug conferring, looking at a bird perched up in a tree. We started up towards them and heard the word "cotinga". Initially they thought it was the common Red-crested Cotinga, but as we got closer they realized it was the much rarer Bay-vented Cotinga! We scrambled up and all got good looks and I got a horrible photo. We also picked up Golden-collared Tanager, another of our targets. A Yungas Pygmy-owl showed very well.  Then things got rather quiet.

After waiting for quite a while Alex suggested that he would go down into the woods and see what he could find. Bryan and Tom decided to go with him. I was feeling the altitude just a little and was happy to wait where we were. They took off down the path to a lower area where they could cut across. The sky had gotten cloudy and some mist was blowing in. They were quite a ways down, when they started to wave. As we hurried down it started to rain a little. We caught up to them just as the rain increased. Alex was searching the hill with his scope, while Tom held an umbrella over his head.

It turns out that Brian had seen the Golden-backed Mountain-tanager in the woods. Just as Tom looked in the scope that Brian had put on it, the mist hid the bird from view. Alex could hear it calling. We got our scope set up, too. Unfortunately the mist was just getting worse and worse. We tried seeing through it, until our eyes ached. Its called cloud forest for a reason. The rain let up and from time to time we could just make out the shapes of the trees, but no flashes of yellow. Alex went down to the forest edge to listen. The bird was still calling (we did hear it) but he didn't see it. It was extremely frustrating! The mist cleared and there was still no sign of the bird.

The good news was that my "horse" arrived. It turned out to be a mule, but that was fine with me. I made it down the hill, but wasn't looking forward to the long hike back up. I found out later that deciding to get the mule at the last minute was a bit of a hassle for Gunnar, so if you do visit Peru and go to Bosque Unchog, decide early! It was WELL worth it, believe me. The mule's owner, Mr. Reye Rivera, patiently waited while we tried and tried to refind the bird. Julio, who was now back to being our driver, sent down some amazing hamburgers that he made for lunch. (This guy can cook!)

Finally it was time to start back up to the van. I mounted my steed with some difficulty, due to my huge feet not fitting into the small stirrups. Martin got some photos of this process, but I threatened him with serious bodily harm if he ever shows them! Mr. Rivera led us up the hill. I very hokily found myself humming El Condor Passe by Simon and Garfunkel. The ride up was almost as good as the birds we had seen. Mr. Rivera was a wealth of knowledge. He pointed out tiny orchids, giving me the Latin names, which I promptly forgot. (This would not surprise Sister Theodore, my high school Lating teacher one bit) He also showed me a stone that had Inca carvings on it and pointed out Incan ruins up on a hill.  I was able to really look at the forest, since I didn't have to be careful about tripping on the path. It was one of the highlights of the trip for me.

We beat everyone but Brian back up to the van. Brian is an amazingly fast hiker! The sky was beautiful. I was really happy, until I tried to photograph a small farm, down the hill from our starting point. The zoom on my camera lens wasn't working. I fooled around with it, but got nowhere. Martin finally arrived and I had him look at it. He was unable to fix it. Somehow on the ride up the lens must have hit my binoculars and it was now broken. I was sick to my stomach. I did have a small spare camera, but it was a fairly simple point and shoot. Camera shops are in short supply in rural Peru, so it looked like I was in a bit of trouble, as far as photos went. I tried to suck it up, but still felt a bit low.

On the way back to Huanaco we picked up a few more birds. Alex found a Barred Forest-falcon. We got decent looks at Brown-flanked Tanager. I still felt a little discouraged about my camera, but on reflection, I was pleased with the day. The only miss was the Golden-backed Mountain-tanager, but the other birds more than made up for it. Most birding group camp at Bosque Unchog for two or three days and don't see all the birds we saw. I also figured some people would be glad that I didn't have so many pictures to show them!

Congratulations for the Rufous-browed Hemispingus! Great photo! I'm one of those that missed the bird some years ago.