Honduras, a New Notch on the Passport and Some Fabulous Birds

Martin and I had thought we wouldn't do a trip this year, but when I saw I had seven days of vacation time to use, we started thinking about what to do with it. After looking at airfares and possible birds, Honduras looked very promising. Martin would not get many life birds, but a couple were important to him. I have not had nearly the experience in Central America as Martin, so I had a lot more to gain. We put out some feelers and got an offer we couldn't refuse from James Adams from the Lodge at Pico Bonito. James put together a great package, visiting several locations, but allowing a nice long stay at the lodge, which is amazing! More on that later.

We were able to book mileage tickets on American. We flew from Houston to Miami, then to San Pedro Sula. The best part of the flight was sitting in the plane looking at Cuba below us, while eating Cuban sandwiches we picked up at the Miami airport. We landed at San Pedro Sula around 8PM. We met a driver sent by the hotel, Metrotel Express, and had no issues at all getting to the hotel. The hotel was great. They have good security, which is important, if you know anything about San Pedro Sula. Even in the dark, the gardens looked very promising.

Our guide wasn't scheduled to arrive until about 11:00 AM, so we took full advantage of the hotel garden. The first bird we ticked was Clay-colored Thrush, a bird we see in Texas. We heard Tropical Kingbirds, another bird we see in Texas. Then Great-tailed Grackles flew over. Guess where we see them? It continued with a number of birds we see in the Rio Grande Valley, Groove-billed Anis, White-collared Seedeaters, Great Kiskadee. Finally, I found a Blue-crowned Motmot, which does not occur in Texas. It is a great looking bird with long "raquets" on the end of its tail. They swing their tails like a pendulum on a clock. We picked up a number of other birds, though nothing new for us. Despite that it was great to be birding in the tropics and were enjoying our first morning. Common Basilisk lizards ran by on their hind legs. A few butterflies were flying. We looked for the resident iguana, but had no luck. 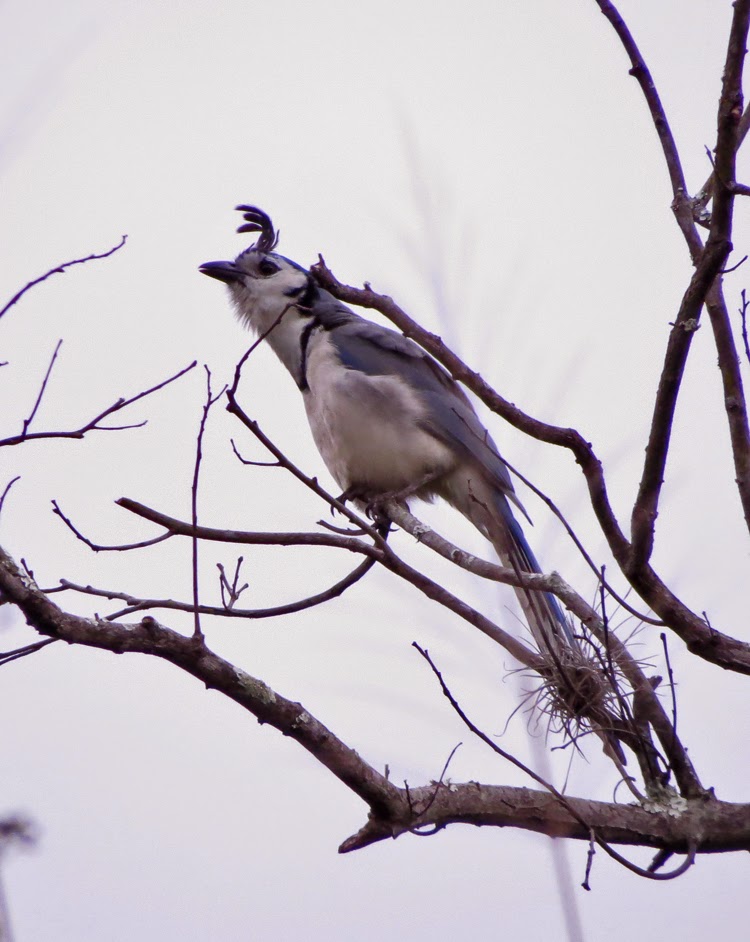 Our guide, Esdras Mejia and our drive Omar, arrived and we got on our way. We were driving to Tegucigalpa, the capital city, to stay near La Tigra National Park. Esdras had a couple of stops planned for us. The first was a restaurant on Lake Yojoa for a quick lunch and some water birding. The food was great and the lake beautiful. I was surprised to find Tilapia just pulled out of the lake is actually good! A Snail Kite hunted over the reeds. We had a few Northern Jacanas, American Wigeons, Blue-winged Teal, and I misidentified a Common Tody-flycatcher, something I didn't think possible.

Our next stop was some dry forest habitat, where I got my first life bird of the trip, White-throated Magpie-Jay. What a stunner! With a crazy dealy-bopper crest and an overly long tail, it looks like a Blue Jay that met up with Sargent Pepper's Lonely Hearts Club Band. A couple of orange orioles, darted out of sight, before we could ID them. I was hoping for a Spot-breasted, but we didn't see enough to rule out Altamira.

We drove through Tegucigalpa, which made me really happy that we had not tried to rent a car. It was insane! The streets are winding and random, and road construction was going on everywhere. We finally got through and started heading up a steep road into pine forest. Many wealthy Hondurans have homes up in this area above the city. It made the division of poor and rich very obvious. Esdras heard some bird calls and we stopped and jumped out. Bushy-crested Jays were calling in the trees above us. Unfortunately, they didn't allow for any decent photos. There were Band-backed Wrens calling in the trees lower down the hill.

We pushed on further up to our hotel, Las Gloriales Inn. This hotel has great grounds, with birds all around. Across the road, we walked past a small house to a ridge, where we picked up Azure-crowned Hummingbird, and Blue-and-white Mockingbird, a real stunner! I practiced my very poor Spanish with a little boy named Marlo, who lived in the house. The sunset over the mountains was spectacular. We walked back to a very nice dinner. After I recovered from the shock of finding out there was no WIFI, we went walking around looking for a Fulvous Owl in vain. I collapsed into bed at about 8PM.