Honduras, Day 6. You won't believe what is happening in the men's room! 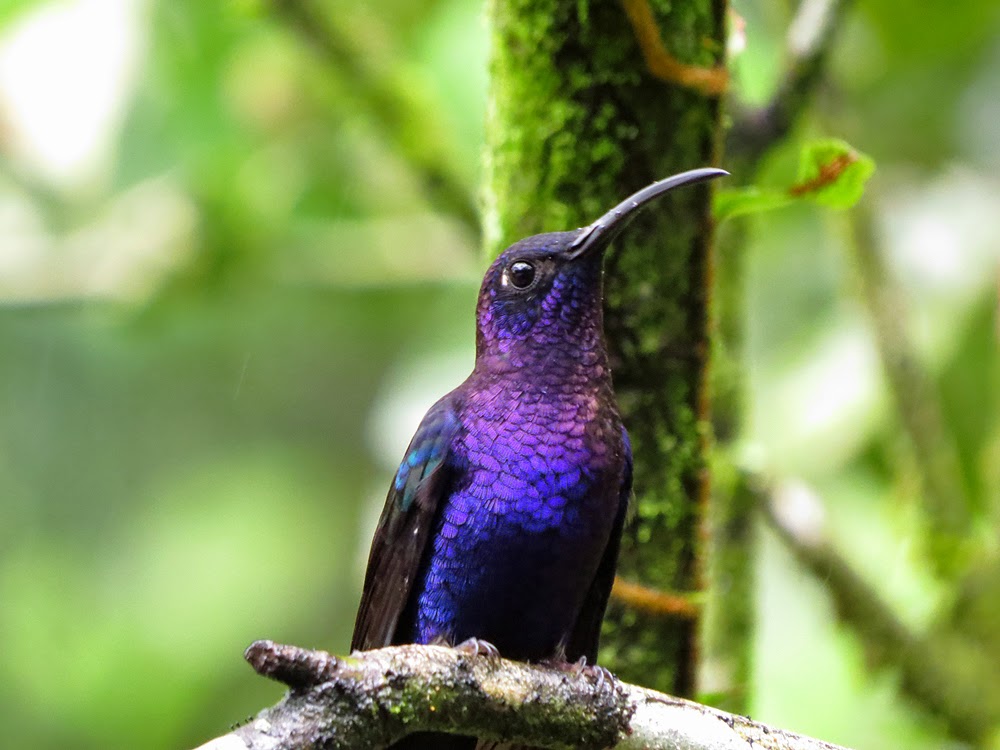 Best title for one of my blogs ever! We will get to that part shortly. We got up a bit later than the day before, hearing Little Tinamou, again, right outside the windown. We had a arranged a morning trip to a nearby hotel, Rio Santiago River Resort. This is an amazing place for hummingbirds, with over 220 feeders. Our friend Paul and his guide Jose, were accompanying us again. It was not too far from Pico Bonito, so we didn't have to leave quite so early. The weather looked a bit threatening, but we were hopeful.

We arrived at the resort and parked. It is quite a nice place, owned by an American who is a former gold miner. The cabins looked great and they were working on some smaller rooms. The main house has a raised covered deck, and there is a palapa with a bar behind the house. A short way up the hill is the aforementioned men's room. We could see hummingbirds shooting by everywhere, but we knew they would still be around later, so we decided to try a trail first and then come back.

The trail was a little steep, but not bad at all. Our first bird was a gaudy Keel-billed Toucan. We came across a beautiful little waterfall. White-breasted Woodwrens were singing loudly. We dropped down a small hill and were excited to see a Royal Flycatcher. Unfortunately, Paul and Jose were behind us and it flew before they got there. We worked up another small hill and had both Gray-headed and Gray-chested Doves on the path. Both were new for me. There were a few warblers around. Then it started to sprinkle. No problem! We had rain gear, so we moved on.  We were very happy to find a White-throated Thrush, normally a highland species. In winter some of the high elevation birds will move down slope. Then the rain got a bit heavier. Then it really opened up. We decided it might be better to sit under the covered palapa or the deck, so we turned back. I started having bad cramps in my legs, I think from dehydration, so the walk back was not fun at all.

We went up to the palapa and there were hummingbird feeders hanging along the edge. One of my most wanted hummingbirds was Band-tailed Barbthroat. Almost immediately, one flew in. Some of the hummingbird species we had been seeing at Pico Bonito were very common, like Crowned Woodnymph, Rufous-tailed and Violet Sabrewing. A Stripe-tailed, which we had seen briefly at the tower, flew into one of the feeders, giving close up and personal looks.  I drank some water and was feeling much better!

We went up to the covered deck to see some of the other hummingbirds that use the feeders in the trees. We talked to the owner and he said they found that they did much better using very small tube feeders, instead of the larger ones. They go through 25 lbs of sugar a day! The swarms of birds were very impressive. We added a couple of new species for the trip,Scaly-breasted Hummingbird,  and White-necked Jacobin. It was still pouring rain, but we didn't care. This was a true spectacle. We all took a ton of photos, some of the best hummingbird photos I have ever taken.

Esdras excused himself and disappeared for a few minutes. I was too distracted by the birds to even notice. He came back up to the deck, holding up his camera and said "You won't believe what is happening in the men's room!" We all fell apart laughing. It turns out what was happening was a bat was sleeping right by the light fixture, not quite what our initial thoughts were. We trooped up the hill and looked in. There was a small bat hanging there, trying to sleep. We took a few photos and left him be. We told the owner to be sure to leave the door open so he could get out later. James Adams, at Pico Bonito, identified the bat as a Chestnut Short-tailed Bat, a fairly uncommon species. We teased Esdras mercilessly about what he said. It will remain for me, one of my all time favorite statements while birding. 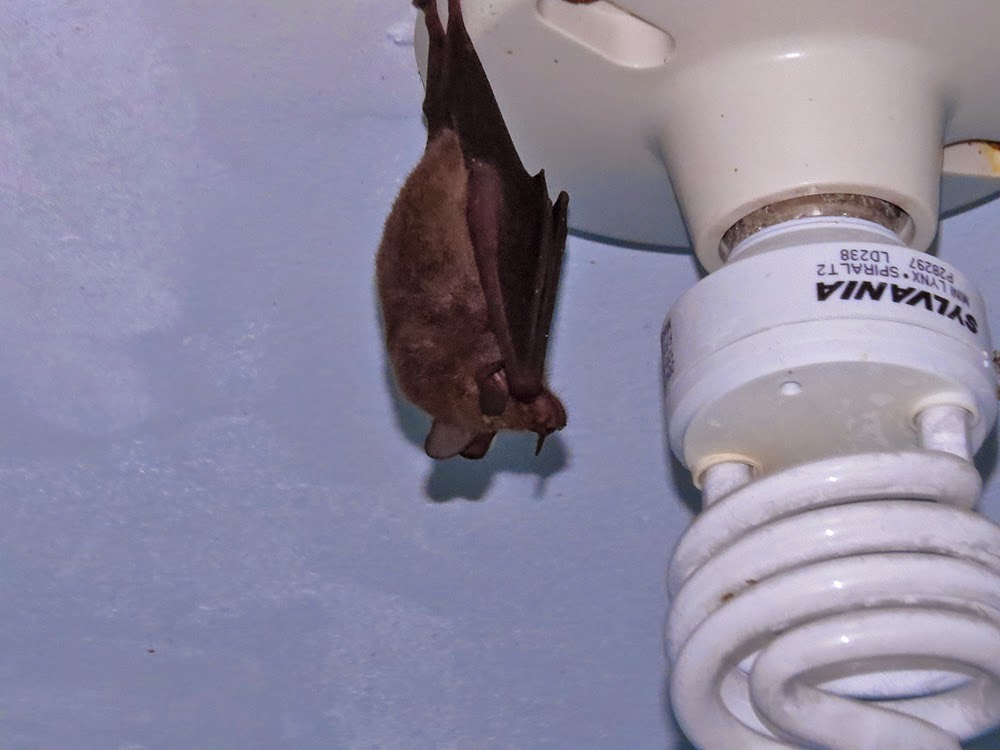 We packed up and went back to Pico Bonito for lunch. (I had the wasabi blue cheese steak sandwich, fabulous!) It was still raining, so we took our time and watched the birds from the porch. Someone pointed to a small tree across the lawn that looked like it had an oddly dark branch. It wasn't a branch, but a very young Boa Constrictor. It had been in that tree for several days, picking off unsuspecting hummingbirds that landed nearby. I had not noticed it at all. I braved the rain and went over a took a few photos, none very good. The rain slowed down, so we birded around the lodge some. It was kind of nice to have a slower paced afternoon.