Our second day was very important, as we only had one day to bird La Tigra National Park. Martin did not have many target birds for this trip; most of them were there. We both have a passion for hummingbirds. Martin wanted to see a Green-breasted Mountain Gem very badly. It would be the last member of the lanpornis family for him, and also a new bird for me. I wanted to see a Sparkling-tailed Hummingbird, and Martin wanted better looks, as he had only seen one briefly in Mexico years before. Besides the hummingbirds, there were a number of high elevation species we hoped to pick up, like Uniform Jay and several other hummingbirds for me. The hike was not going to be easy, but we were excited.

We left Las Gloriales early and started up towards the park. It was pleasantly cool, but the people we passed were bundled up like it was about to snow! We were in shirt sleeves and were fine. We stopped and Esdras started doing a Ferruginous Pygmy-owl whistle. Very quickly, we heard an answer. A very stern looking pygmy-owl glared at him. A pair of Band-backed Wrens, a new bird for me, fussed at both of them.  The first of many Wilson's Warblers flitted around. A gorgeous Blue-and-White Mockingbird gave me a really good look. It was a great start.

We moved up a bit further, to a spot that normally has the Sparkling Tailed Hummingbird. None were around, but a lot of other birds were. A Cinnamon-bellied Flower-piercer worked through the vines and bushes. We spotted a Hammond's Flycatcher. A Slate-throated Redstart joined in. I spotted an Olive Warbler. Then Martin got his target bird. Even though the Sparkling-tailed wasn't present, I was excited to get the mountain gem. Some of the pressure was off. Then it started sprinkling. It wasn't heavy and we pressed on.

We moved up further, checking places for my target hummingbird, but had no luck. We stopped in a pine forested area and heard an unearthly, beautiful song, a Slate-colored Solitaire. Tropical solitaires songs send shivers down my spine. We pushed up the hill, listening to the bird calling. Finally, we spotted the bird tucked in a pine. Esdras got the bird in the spotting scope very quickly and we enjoyed both hearing and seeing it. We also found another new bird for me, a Mountain Trogon. The sprinkling continued on and off. We made a few more stops, seeing lots of birds, but not the Sparkling-tail.

We reached the park entrance, had some late breakfast, while birding around the picnic area. The rain picked up slightly, but we didn't have any problems with it. We started up the trail. There was a pretty good incline, and I was slow, as usual. The further we got, the heavier the rain became. We were not hearing any birds at all. We kept going. The rain got even heavier. We stopped to re-evaluate our situation. The birds were totally silent. I was getting winded. We laid out our options and decided to cut our losses and head down slope. We wouldn't have minded getting wet, or tired, but not if we weren't going to see birds. We headed back down. I stopped in the headquarters, where I saw this marvelous mural. 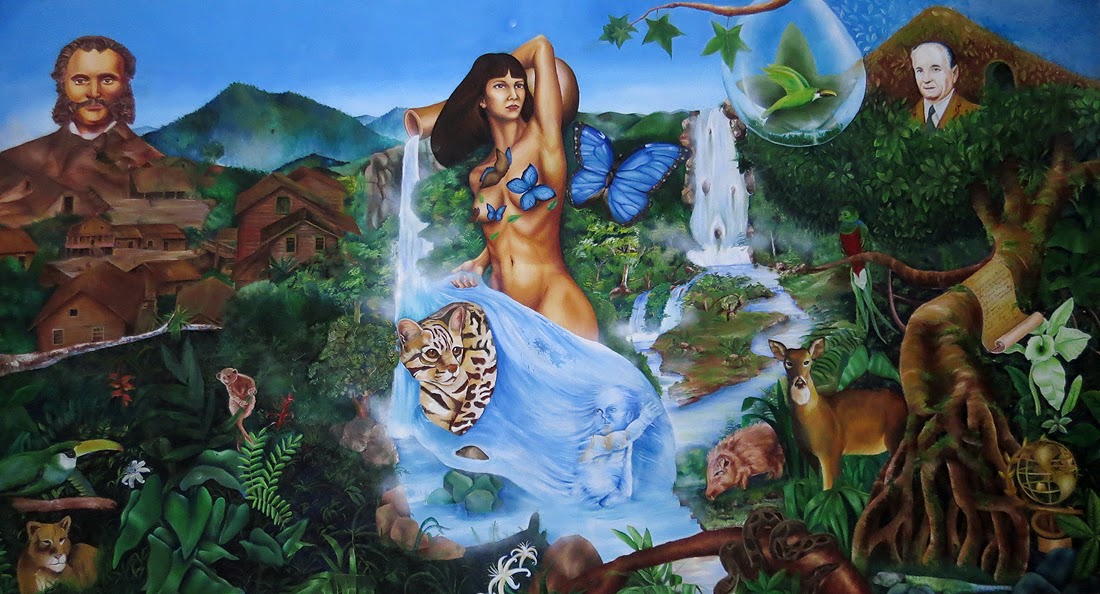 Esdras said we could concentrate on the Sparkling-tailed Hummingbird, which was always around. Yeah, right. We made several stops, with no luck. We did see more of the mountain gems and some Azure-crowned Hummingbirds, Wilson's Warblers were driving us crazy. Who knew they could flit around like hummingbirds? The rain had slowed to a sprinkle again, making conditions more pleasant. We toyed with going back up to the park, but the last bit of the road was difficult before the heavy rains. Our vehicle was only two wheel drive, so we thought better of it. We took our time and arrived back at the hotel and had a late lunch. Martin was not feeling well, so I birded around the grounds, while he rested. It was a bit disappointing to miss the high altitude birds, and for me, the Sparkling-tailed Hummingbird, but I was still really enjoying it.

Photos from the day: