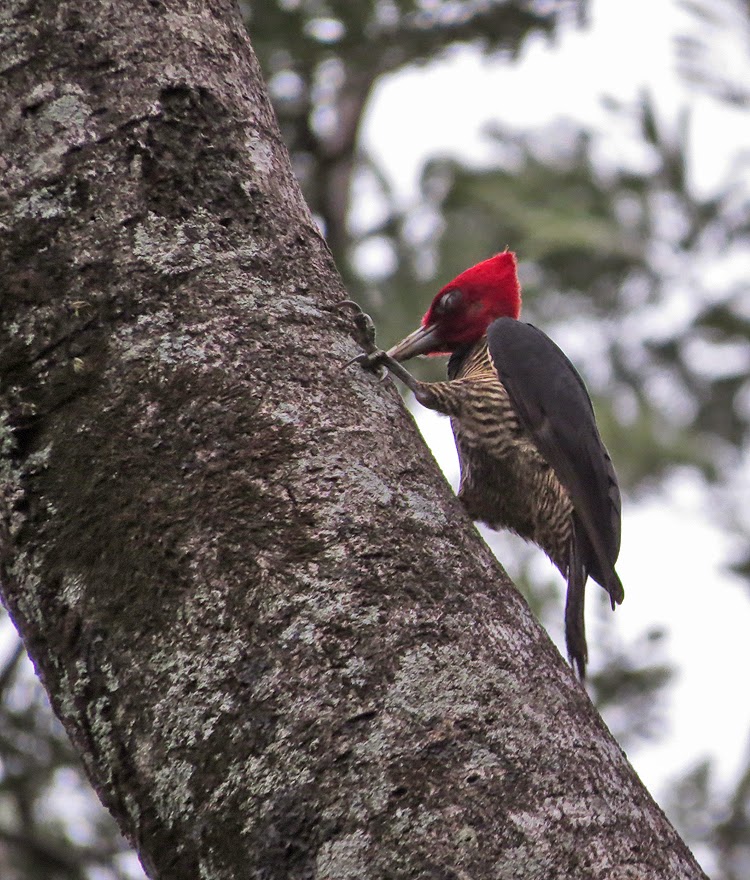 We got up and had some breakfast outside at Las Gloriales. The weather was a bit foggy, but there was no rain. We had a pretty long drive ahead of us to Pico Bonito, but we could squeeze a bit of birding in on the way. We had to be in San Pedro Sula to transfer to a new van by 1:30PM. That gave us a couple of hours if we left early. After a quick stop near the hotel, without seeing much, we got on our way. Tegucigalpa was challenging again. There isn't a straight street in that city!

We made a quick stop along the road in the dry scrub forest,  where we found a couple of Streak-backed Orioles.  Martin spotted a pair of Western Tanagers. One bird that Martin really wanted to get some photos of was White-throated Flycatcher. It is one of the empidonax flycatchers, which all look alike. Identifying them is a huge challenge. White-throated occurs very close to the Texas border and could possibly occur there in the future. It likes wet marshy areas. Esdras knew a good spot at a hotel on Lake Yojoa, which was on our way. We could also grab an early lunch there.

We arrived at the hotel, called Finca Las Glorias. The grounds looked great. We spotted a couple of Rufous-naped Wrens chasing each other in a large tree. We stopped at the hotel restaurant to check on lunch and told them we would be birding around the grounds. We headed down to the lake side, where a large foot bridge crossed a small inlet. A young Snail Kite was perched on a light pole. Esdras started playing the call of the flycatcher and almost immediately one responded. We were able to get some photos and study the bird and its call, which is very different than any of the North American empidonax flycatchers. We scoped some ducks out on the lake to pad our Honduras list.

There was a stable between the lake and the hotel. Some guys rolled out a marimba and got out a few rhythm instruments and started playing. A man on a white horse came out of the stable, with the horse "dancing" to the music. They were followed by a young colt, who looked like he was imitating the dancing gate. I was impressed, but that isn't difficult. We walked around a bit more, looking for butterflies and other birds. It was time for lunch and we partook of the really nice buffet.

We hustled to our meeting point to change vans. Omar, our driver, had to return to Tegucigalpa. We arrived and moved our things to the Pico Bonito van. It was still a couple of hours to the lodge, so we took off. We were seeing a lot of Honduras! We passed huge plantations of African Palms, which are grown for oil. A lot of habitat has been lost to this crop.  Despite this, the countryside was beautiful, with lots of small mountains. We noted a lot of very clear looking rocky rivers, though there were few birds on them.

Finally, we arrived at La Ceiba, and took the turn for Pico Bonito. After a couple of kilometers, we reached the gate. The Lodge at Pico Bonito is one of the Small Luxury Hotels of the World. It is a far cry from some of the places Martin and I have stayed at in the tropics. It retains the adventurous feel of the tropics, but adds a great deal of luxury! The lodge sits on the edge of Pico Bonito National Park. There is over 400 acres of tropical forest. There are miles of trails and over 450 species of birds in the park. The game cameras routinely capture video of wild cats, including Jaguars. 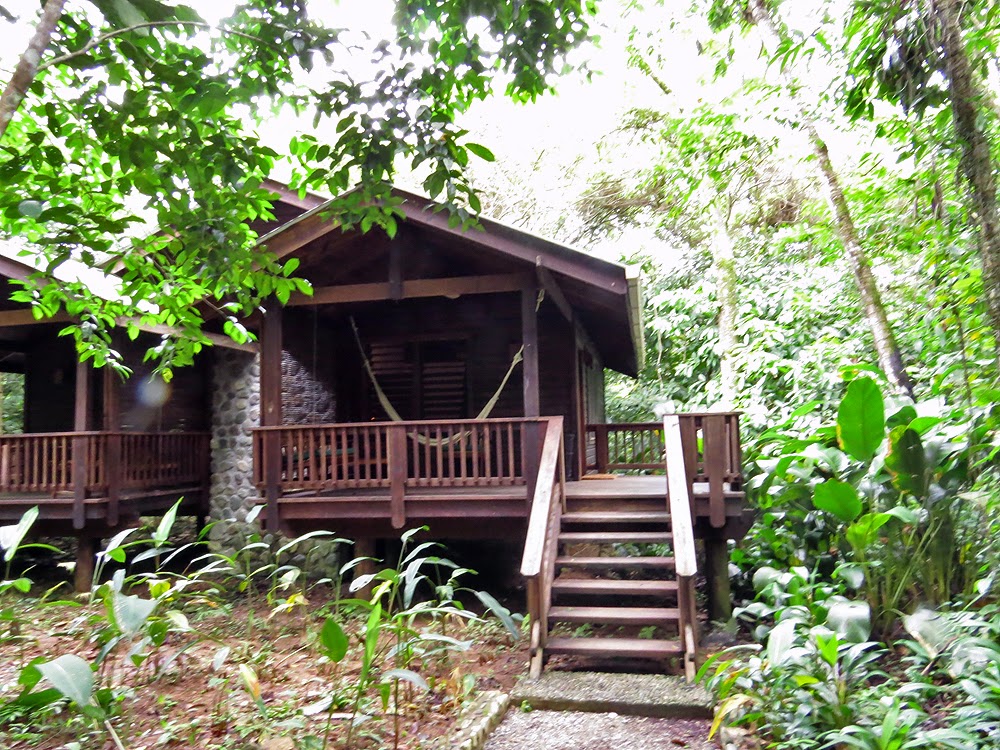 We walked into the lobby and were met by a waiter with virgin juice drinks in hollowed out coconuts. The waiter asked if I would like rum and I replied, "Uh, yeah!" We checked in, and our luggage was taken to our cabin. We walked out on to the veranda where I got two life birds in 10 seconds, a Long-billed Hermit and the spectacular Violet Sabrewing. How can anyone not love a huge purple hummingbird with a snowy white tail? Crowned Woodnymphs and Rufous-tailed Hummingbirds swarmed all around. A little Stripe-throated Hermit fed on some pink flowering shrubs. We could see the beautiful pool across the lawn.

Our cabin was a short distance away, so we walked up the path into the woods. When we reached it, Esdras pointed out a group of warblers up in a trees over the roof.  He left us and we got settled in. The cabin was beautiful, with heavy wooden shutters over the windows, a high vaulted ceiling with fans over both beds. The bedding was crisp and white. We unpacked, as we were going to be staying for five days. We stepped outside, where we heard and saw a Northern Bentbill. A Pale-billed Woodpecker was hammering away on a tree trunk above our heads. We went back inside to get ready for dinner and a Little Tinamou started calling right outside the window. This was going to be good!

We walked up to the restaurant for the first of a series of great meals. Martin had rack of lamb and I had sea bass cooked in garlic. The creme brulee. Our waiter, Howard, was awesome. We talked about how this was an experience even a non-birder would love. We went back to the cabin and fell asleep to the sounds of the jungle. There was no need for the air conditioning, as it was cool enough for a blanket. Here is a link to the lodge's web site. http://www.picobonito.com/the-lodge.html