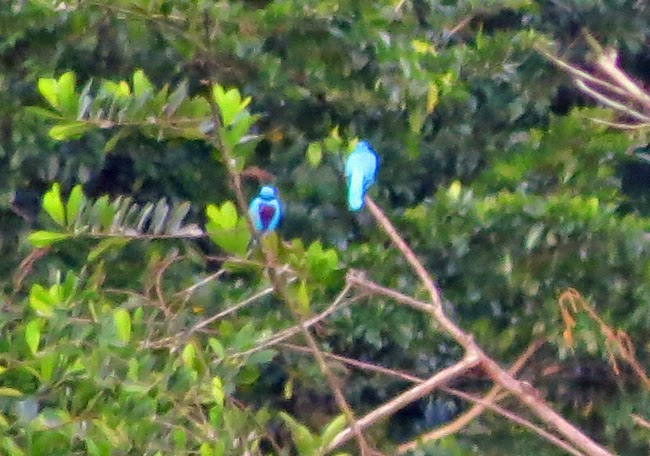 We got up to the sounds of a calling Little Tinamou and a Black-and-white Owl outside of the cabin. We walked out of the cabin, when a good size bird shot by, lighting in a tree next to the cabin across the path. It was one of my most wanted birds, a Keel-billed Motmot. We were very lucky, as it was the only one we saw on the entire trip. We walked up to the lodge, where we met Esdras for a cup of coffee before we started on the trails. Breakfast would wait for a bit. The weather was threatening, but still dry. The hummingbirds were already speeding around. Red-billed Pigeons flew from tree to tree, along with raucous Brown Jays. A pair of Collared Aracaris were eating fruit nearby.

Our first stop was the tower near the lodge. We were looking for the star bird at Pico Bonito, Lovely Cotinga. Pico is probably the best place in the world to see this fabulous bird. The male cotinga is electric sky blue with a huge dark purple heart on its breast. How crazy is that? We climbed to the third level and started to scan. Esdras almost immediately spotted a pair of males perched on a tree top off in the distance. We got them in the scope. They were every bit as beautiful as I expected. We ended up seeing several more, all quite distant, but fine through the scope. My very heavily cropped photos are horrible, but they do show the color. A lovely Purple-crowned Fairy hummingbird perched near the tower. A Stripe-tailed Hummingbird was feeding in some purple flowers beneath the tower. The sky started to clear. Martin spotted swifts overhead. We had both Vaux's and White-collared. I actually got a photo of a swift in flight, which was a first for me.

We went up and had breakfast. When you go to Pico Bonito, be sure to get the pecan encrusted french toast. It is mind blowing. We watched the hummingbirds feeding. Montezuma and Chestnut-headed Oropendalas gave their crazy calls, both of them of the new birds for me. James Adams, one of the lodge managers, came out and joined us. We had a great talk about the lodge and the wildlife there. James asked us if we would like to see a snake, and I said "Of course!" He brought out a bag tied at the top. The form of the snake was visible in the bottom. He got Esdras to come over and help him, as he very carefully untied the bag. He took a snake stick, reached in, and pulled out the most beautiful Coral Snake I have ever seen! The colors were so rich. He had found the snake at Rio Santiago Resort and wanted to photograph it before releasing it in a safe place. James told us how he had been bit by a Coral Snake a few years back and almost died, so he was VERY careful. It was one of the big highlights of my day. (I really, really like snakes!) 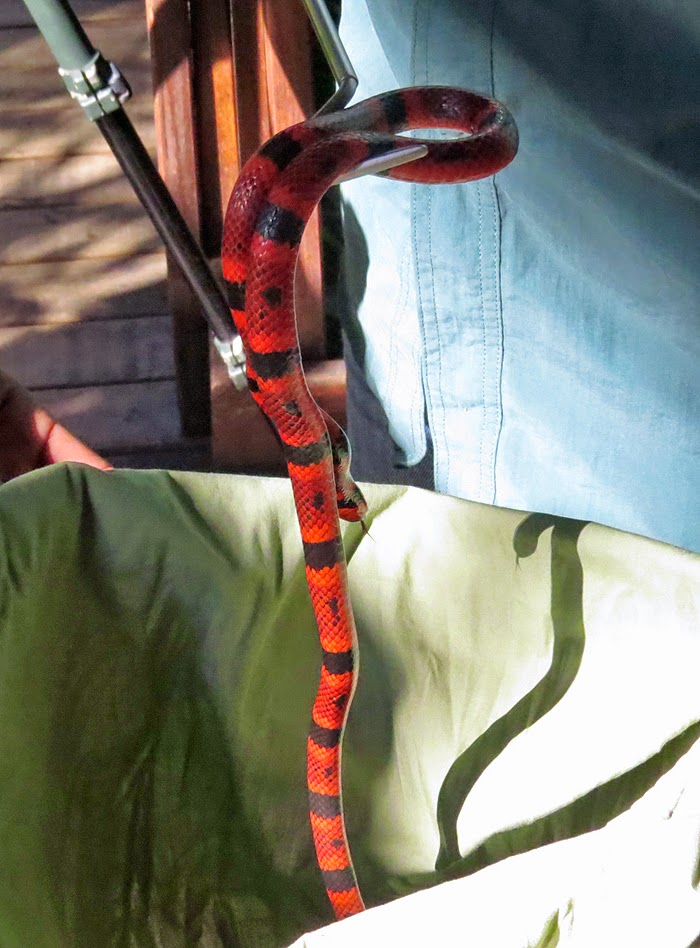 We walked around the grounds some more and found another new bird for me, one that was also very wanted, Chestnut-colored Woodpecker. This is a fairly big crested woodpecker, chestnut brown. The male has red cheeks. We found a number of "our" birds around the grounds, including Philadelphia and White-eyed Vireos, Hooded, Chestnut-sided and Magnolia Warblers, Yellow-bellied and Olive-sided Flycatchers and a Yellow-bellied Sapsucker. I told them I would see them in a few months. It was getting close to lunch, so we went back to the cabin, tidied up and went down for lunch, which was also really good!

After lunch we decided to hike up hill to the second tower. I realized I had somehow lost my walking stick in the transfer the day before. I said I would be ok without one, but Esdras said, "No, take one from the lodge." We started up a set of stone steps. It had started to sprinkle again, but it wasn't bad. The steps were on the tall side and my knees complained all the way up. I had not done my normal preparation for hiking before the trip, and I was paying for it. The birds were pretty quiet, but we Esdras did find some White-collared Manakins. We went further up, and further up. Finally, we got to the turn for the second down. The path descended sharply, a long way down. I looked down and realized I would have to come back up that hill. I said "I am going to stay here and wait for you to come back. I am quite happy to sit here and watch for birds to come by." Martin objected, but I told him I really was happy to stay there, and I was.

He and Esdras started off. Not long after they left I heard some birds calling. I moved around a bit and spotted an Orange-billed Sparrow in the under story. I then saw the only antbird of the trip, a Dot-winged Antwren. A female Green Honeycreeper landed right above me. I didn't wait too long, when Martin and Esdras returned. They had not seen much. Martin was really hoping for a couple of higher altitude birds, Gray-headed Piprittes and Nightingale Wren. It was not to be. We went down the stairs, which didn't make my knees any happier. We ran into another group of birders who had arrived at the lodge near the first tower. They were looking at a couple of Lovely Cotingas, so we had a look, too. How could we not? We went up to dinner and retired very early, as we were leaving at 4:00AM for the Honduran Emerald Reserve.