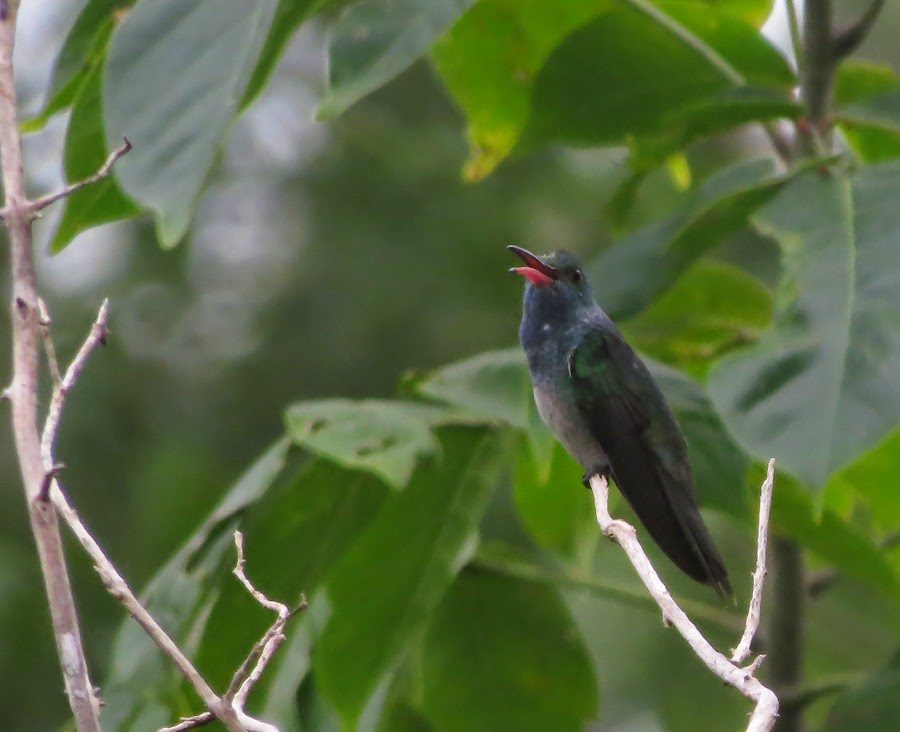 There is only one true endemic bird found in Honduras, the Honduran Emerald. This hummingbird is an endangered species found only in the dry forest of Honduras. It is one of the most wanted species for birders coming to Honduras. There is a reserve across the mountains from Pico Bonito. As the crow flies it is only about 12 miles, but, to drive there takes a bit longer. This is not a bad thing, as the lack of roads across the mountains is a protection for the many birds, mammals and reptiles found there.

Because the drive is so long, we had to depart at 4:00 AM. We dragged ourselves out of bed at 3:30 AM, got dressed and staggered up to the van. Besides the driver and our guide Esdras, we were joined by another birder, Paul and his guide, Jose. We had met Paul briefly on our first day. He was a lot of fun, very funny. His guide, Jose, is a total hoot, so we didn't mind a bit. We all snoozed on the van, except the drive, thank goodness. At about 8:00 AM we stopped on the road at a gas station that had picnic tables for breakfast and a bathroom break. Breakfast consisted of baleadas, a Honduran breakfast taco, with eggs, beans, cheese and some type of meat. They are really good, and very filling!

After breakfast we took off, making several stops before reaching the Honduran Emerald reserve. On our first stop we checked some fields and a small road that ran perpendicular to the highway. There were a lot of White-collared Seedeaters, Blue-black Grassquits and at least one Indigo Bunting. Esdras was very excited to see a Tri-colored Munia, an Asian exotic that has become established in Honduras. He said it was a new bird for him. I teased him a little by saying "Haven't you ever been in a pet shop?" He laughed, but I know he was excited to see it. A pair of Red-lored Parrots perched in the top of a tree and preened each other. We found a fairly rare bird for the area, a Yellow-billed Cuckoo. Unfortunately, we did not see our target bird, Double-striped Thick-knee.

We made a couple of other stops and finally found one a couple of our targets. White-lored Gnatcatcher had eluded me in the Yucatan. We found a pair in some scrub by the side the road. We also found Spot-breasted Orioles, another new bird.  We stopped and played the call of Lesser Roadrunner in a likely looking place and were very happy when one answered. It sounded like it was getting closer. Martin spotted it sitting in a distant tree. We got great scope views.

We arrived at the reserve at about 10:00AM. We pulled into a small farm with a house. The family was sitting on the porch, the father, holding a rifle, the mother nursing a toddler, and several older children. The father pointed up in the tree by the house, and there was a Honduran Emerald. That was the easiest bird of the trip! We gathered our stuff up and took a hike into the reserve. We climbed through a narrow spot in a barbed wire fence, and Martin and I got a few tears in our shirts. I wore sneakers instead of boots, because it was dry forest, right? Big mistake. There were horses and donkeys in the field and quite a few puddles. The combination was not great for sneakers. Those shoes are still in Honduras.

Esdras pointed out the plant that the emeralds feed on. It is a succulent, similar to pencil cactus, with a tiny flower scattered here and there. I have no idea how these birds make a living on it. We found several more emeralds fairly easily. Cinnamon Hummingbirds were rather aggressive, chasing them off almost every time I tried to take photos. We tried for Lesser Ground Cuckoo, with no success. I asked Esdras if they ever miss the emerald there and he said no. I told him I was way too superstitious to ask him that question before we saw it.

After we left the reserve, we stopped for lunch. Instead of a restaurant we ate at a private home, where the woman of the house prepares traditional food for guests of the lodge who go the reserve. It was really nice to eat true Honduran food in a home. We had fried chicken, pork, some home made cheese, beans and tortillas. It was really good! While we ate, I sneaked tiny pieces of chicken and pork to their cat, a half grown calico. I know I was misbehaving, but the cat was really cute. After lunch I wandered around a bit and photographed some butterflies, including a Blue-eyed Sailor and a Gray Cracker. We looked for the Double-striped Thick-knee on the ride back, but had no luck.