The Last Day of BIrding. Have the Pancakes! 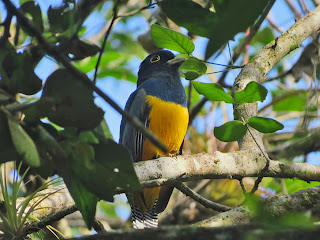 After returning from Rio Lagartos, we sat at dinner and discussed what we should do on our last day. It was the one day we left open, thinking we could return to the coast or try and find someplace close to Cancun. I suggested we visit Coba, a small near by city with a lake known in the past for having Spotted Rail and a great archaeological site set back in the jungle. Martin and Dan said it sounded good to them, so a plan was made.

We got up and left the hotel, a bit regretfully, I will say. We drove to Coba and scanned the lake, which the town is built around. There was some flooding going on. Several low lying businesses were partially underwater. It didn't look promising for rails at all, but we thought we would give it a go anyway.  We were a bit hungry and Dan and I were craving coffee, so we stopped at a restaurant next to the lake. The waiter told us they opened at 8:00AM, which wasn't too long. We said we would be back. We drove around the lake as far as we could, until flood waters were too deep. Both a Ringed and Belted Kingfisher were hunting from utility wires over the lake. The lake itself was almost devoid of water fowl. In fact, there were no ducks at all, only some Pied-billed Grebes.

Where we ran out of dry road had a small group of trees and some tall grasses in the water. We started scanning the trees and Martin found a female Cape May Warbler. I discovered a great looking lizard with a very long tail. Some friends identified it as a young Basilisk. Martin had moved down to the end of the grasses looking for dragonflies. Suddenly he started waving for us to come over. There was a Ruddy Crake working through the grasses. Crakes are almost always tough to see, but this one was semi-cooperative. We even got a few pictures. Then we saw another one and heard a third. A Limpkin strolled by. It was 8:00AM so we decided to celebrate with breakfast.

We drove back to the restaurant and parked the car. We went in only to find out they actually don't serve breakfast until 9:00AM. The 8:00AM opening was for the ruins, which, unknown to us, were right behind the restaurant. We decided to go to the ruins and come back out at 9:00AM. As we were preparing to go in tourists started to arrive, but not in huge numbers. We passed the souvenir vendors, who were also selling things for "almost free." We purchased tickets and walked in. It was a bit of a walk to get to the ruins. As we passed through the trees we came to a huge lot with hundreds of bicycles and pedi-cabs. This was rather disconcerting. How many people were they expecting?

We walked further in and the ruins were great! They are very similar to the ones at Calakmul, buried in the forest. There was a really cool structure with huge stone rings on either side, that I assume was a game court. The pyramid was awesome. We quickly found Yellow-throated Euphonias and a stunning Gartered Trogon. I found a couple of butterflies, including a Ruddy Daggerwing. It was finally 9:00AM, so we decided to go eat and then return.

We sat down and ordered breakfast. Dan and Martin got Huevos Mexicanos, but I am not all that crazy about eggs, so I ordered pancakes. They both looked at me like I was silly for getting pancakes in Mexico, but boy, were they wrong. The waiter brought our food and as soon as he sat mine in front of me Martin said "Those pancakes smell incredibly nice!" They were incredibly nice. I am not sure what they do to them, but they were the best pancakes I have ever eaten. They were yellowish, and I suspect they had corn in them. They were naturally sweet. I gave Dan and Martin both a bite and they were very jealous!

After we ate we went back into the ruins. Martin wasn't feeling very well and didn't want to walk a long way, so we agreed to meet at the restaurant at about 11:30AM. Dan and I took off to see some structures about a kilometer away from the entrance. We got about half way there when we heard a lot of jays calling down low. There was an ant swarm. Ant Tanagers were all over the ground. Ivory-billed, Olivaceous , and Ruddy-winged Woodcreepers were on the trees. We worked the flock for a bit and then took off walking to the ruins. I got about a city block down the path, when I realized I couldn't leave that ant swarm. I told Dan I was going back and would meet him later.

As I started back, I saw some movement on the forest floor next to the path. A White-nosed Coati scrambled up one of the trees and sat on a branch looking at me nervously. I have seen Coatis before, but I was still excited. I looked up and a family with two kids were approaching in a pedi-cab. I called out "Coati!" to them and pointed up in the tree, but they were not interested at all and didn't even answer. They probably thought I was crazy. All I know is that when I was a kid I would have freaked out seeing a Coati.

I got back to the ant swarm and the birds were still very active. A number of flycatchers were moving in the tree tops. Dan came back fairly quickly and we spotted an Eye-ringed Flatbill, a flycatcher. A Bright-rumped Attila came in for a few seconds. Even though there were no new birds, it was still so much fun to watch. It was getting close to the time we were supposed to meet Martin, so we headed back. We hadn't gone far when we noticed a young man kneeling down taking photos of something on a tree trunk. Of course we had to look. It was one of the creepiest things I have ever seen! A flat mass of huge caterpillars arranged in a large oval, tail to tail. Their mouths were moving. I took a short video of it. It doesn't even begin to show the shivery creepiness of it.

Martin was sitting at a table in the restaurant. I was surprised he didn't have a plate of pancakes in front of him, instead of just a Coke Zero. We all had a drink and then headed back out to bird. We worked the roads above the lake. I took a few butterfly photos. We saw a few birds, but it was getting really hot. We found a different restaurant with a "Mayan" buffet. The restaurant was packed with people from tour buses, probably from cruise ships, but with it being a buffet, we didn't have to wait. The food was actually quite good. We had a bit of a drive back to Cancun, so we decided to wrap things up and head back.

This trip was so much fun! I highly recommend the Yucatan. There are enough wild areas left for it to feel exotic and to see plenty of things you won't see at home. It is easy to get there. It is easy to get around. We did everything with a regular car, an SUV was not needed. The food is so good. You can find reasonably priced hotels if you get out of the tourist areas. There are not the safety issues you have in other parts of Mexico. The people were wonderful! This would be a great first trip to the tropics. If you have any questions please let me know. Thanks for sharing our trip. I can't wait for the next one!