Calakmul. The Road to Ruins. 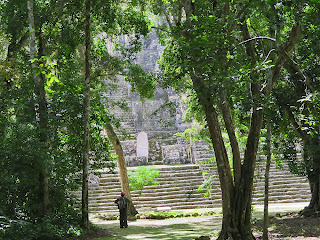 We had to get up very early to reach the gates to Calakmul before dawn. I think we left the hotel at about 4:30AM and arrived at the first gate a bit after 5:00AM. Even though it was very early for birds, with sunrise not until 6:00AM, this would maximize our opportunity to see mammals, with any of the cats being very high on our want list.  The bio-reserve is the best possible place to see Jaguar. The gate was open and we drove in.

We hadn't gotten 100 yards down the road when our first mammals crossed the road, a pair of Raccoons. Of course they are super common in Texas, but still, mammals are always fun! We drove a bit further and spotted eye glow. We eased up and saw a rabbit, probably an Eastern Cottontail. Guess who also lives in Texas? The next two sets of bright eyes were night birds, a Common Paraque and a Yucatan Poorwill. At least the poorwill isn't in Texas! We pushed on and as it got light we turned a corner and there in the middle of the road was a Gray Fox! Even though they live in Texas, I was still excited. I don't see fox very often. A couple of Great Currasows ran in front of us, allowing me one really awful photo.

We heard several eerie sounding whistles, Slaty-breasted Tinamous! Timamous are notoriously difficult to see. Their calls echo in the forest, but almost all looks, when you get one at all, is a tail end disappearing into the forest. They walk through the forest, camouflaged incredibly well. There were probably four or five calling and they sounded very close. Martin whistled back and one seemed to be coming closer. We peered into the dark forest, but didn't even have a glimpse. Martin whistled again and the bird seemed to be even closer. After several back and forths we gasped when the bird walked into full view! We were incredibly lucky. There were high fives all around and we got back in the car.

We arrived at the second gate and stopped to pay our fee. We heard hammering and saw a beautiful Pale-billed Woodpecker on a pole. The Ocellated Turkeys were still wandering around.  Now came the long slog to the ruins. The forest had been good up to this point. It became even better. All along the road flocks of Brown Jays flew up yelling. It sounded like they were announcing us, "CAR! CAR! CAR!" We had more Yucatan Jays, with their 1960s powder blue tuxedo wings. Much of the woods was flooded; we wanted dry ground, hoping for ant swarms. As we got further in we finally found a small swarm. Both Red-throated and Red-crowned Ant-tanagers were in attendance. We had several species of wood-creepers. The swarm was small and we decided to move on to try and find more.

We finally arrived at the site of the ruins. We started down the path towards the main temple and saw something amazing. An ant swarm was moving across the path, with the ants so thick it looked like smoke. We checked for birds, but didn't find any, but the swarm itself was stunning. None of us had ever seen one like it. I was able to get a quick video clip.

Calakmul is not one of the manicured archaeological sites. The pyramid and other structures rise right out of the jungle. We walked through moss draped trees and came face to face with a huge imposing temple. One of the nice things about Calakmul is that you are allowed to climb the structures. Unfortunately, my knees and sense of balance kept me from doing so. Dan climbed up and had incredible views of unbroken forest as far as he could see. I found it difficult to tear my eyes away from the tree draped structures and look for birds.

On the walk in we had passed a small lake. Martin was lusting after dragonflies, so he went back and Dan and I agreed to meet him a bit later. We wandered around and I found what was almost my bird of the day, a beautiful male Golden-winged Warbler, which is considered rare in that area. I photographed a few butterflies and we met back up with Martin. We did a bit more birding and decided to head back out to the entrance road. As we headed back to the car we flushed a Ruddy Quail-Dove.

We hadn't gone very far when we found another ant swarm. This one had five species of Woodcreepers, Ivory-billed, Ruddy, Olivaceous, Tawny-winged and Northern Barred. Ant-tangers were running everywhere. Martin found a Rufous Mourner, a real surprise, at least for me. A Squirrel Cuckoo came in, a bird I never tire of. Different flycatchers, including an Eye-ringed Flatbill, flitted around higher in the trees. It was very difficult to leave, but we were concerned about the gate being closed when we got back. We saw two more mammals, White-tailed Deer and Collared Peccaries, again, both commonly found in Texas. What the heck?

We worked our way back and were able to get through both gates with no problems. We arrived back at our hotel and had an excellent dinner. We discussed what we wanted to do the following day and decided to have a leisurely morning and leave for our next destination, Chichen Itza a bit later. I think we all slept very well.
Photos - www.flickr.com/photos/sngcanary/11172006624/in/set-72157638281416383