This was a busy day, with some travel, some owls, and the most endangered bird of the trip. It was to be our last real birding day of the trip. Some of us got up early to bird around the hotel grounds and look for Martin's Eurasian Nutcracker. Unfortunately, we didn't find it. We met the rest of the group and had our last substantial breakfast in Belarus. (They served these pancakes that were more like fried American biscuits. OMG!)

We had to drive quite a ways. It was after lunch that we picked up Sasha, another forest ranger. He was going to take us into an area set aside for Great Gray Owl nesting. Martin and I had seen Great Gray Owl in Minnesota, so it wasn't the highest priority, but who doesn't love seeing owls? We had been warned that it would be the worst place for mosquitoes, which I wasn't enthusiastic about. We covered ourselves in DEET and I put on my rain jacket with the hood up for protection. We took off down a path and I kept waiting for the attack. Mosquitoes adore me, so I told everyone I would draw them off. Imagine my surprise when the swarms never materialized. 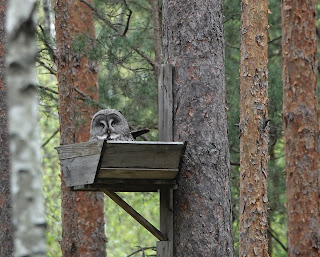 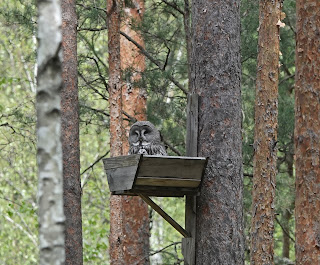 We didn't have to walk too far, when we stopped and Sasha pointed to a tree. There, perched in a wooden nesting box, sat a female Great Gray Owl. Even though it wasn't a new bird for me, my breath caught. We weren't too close, but she still kept an eye on us. It was a big target bird for the rest of the group. The feeling was electric! Then a downy owablbllet poked his head up, to our great delight. While everyone else was drinking in the owls, I spotted a Pied Flycatcher. Barrie said we were really lucky. Most of the nest boxes in this forest were old tires with drainage holes in the bottom. He had seen an owl in one the year before, but all they could see was the top half of the female's head. The mosquitoes were never a problem. As we returned to the mini-bus we spotted a fox on the road. 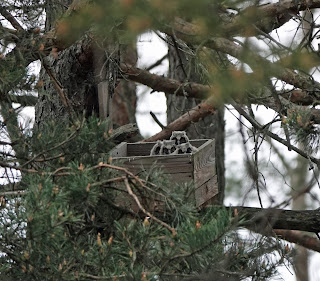 Sasha then took us to another spot, where there was another wooden nesting box. Four downy Long-eared Owls peered out. It was a wonderful surprise, the fifth species of owl for the trip. They had a very fierce expression for babies. We then dropped Sasha off at his house, where three of his seven children came out and shyly looked at us. He made a little speech about God and the Bible, which I found a little uncomfortable, but I was glad for the birds he showed us.

We then left for the last hotel of the trip. We had a few birds along the road, and I enjoyed the countryside and small towns. We arrived at the hotel and checked in. Barrie said we would be leaving shortly for the last bird of the trip, one of the rarest in Europe. We went up to the room which was really lovely. I looked out over the town square and saw a couple of Common Swifts shoot by, another new bird for me. Most of us got on to the van to go to our last real birding stop of the trip. One couple chose not to go. I'm not judging. (Who am I fooling? I am too!) 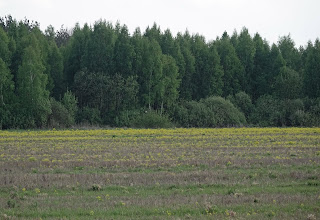 We drove out past the edge of town to a marshy grassy area. We were going to look for Aquatic Warbler, one of the most endangered birds in Europe. This species has lost much of its wintering habitat in west Africa. Belarus is the easiest place to see it. We met a warden of the preserve and walked down the hill to see if we could find one. I was really surprised at the habitat. For some reason I expected it to be in reeds, but it was short grass marsh. As in other places we visited, the water levels were very low. We walked out listening for the call. One was calling nearby and we all struggled to see it, as it popped up and down. I finally got a decent look in the scope, but photos were impossible.

We trudged back to the mini-van and returned to the hotel for our last dinner in Belarus.I am not going to write about our trip to the airport the next morning, as it was fairly uneventful. We flew back to London on a two hour flight, with more gray meatloaf! I want to say, the food in Belarus was much better than the food on Belavia Air. The flight was comfortable and I was sad to say goodbye to our birding comrades.

I would highly recommend birding Belarus. Personally, I would not do it on my own. The signs are all in Russian, in the Cyrillic alphabet. Very few people speak English. There are some local guides, but in May they are hard to come by, as they are employed by tour groups. I was very pleased with Naturetrek. The tour wasn't really aimed at hard-core birders, but we saw almost every expected bird. The guides were wonderful, enthusiastic and very helpful. I got 43 new birds! My total list was 135 species.  If you have any questions, let me know!