Belarus, not where I expected to go birding. Day 1

I haven't written any posts in quite some time, mostly because I couldn't imagine anyone reading them. I decided to go ahead and do a daily report for this trip because Belarus is not on the radar for the vast majority of American birders.

We came to the decision to go to Belarus in a round-about way. Martin's nephew was getting married in England, and we decided to attend. Since we were already going to be going that far, we decided to add a birding trip in Europe. Our initial choices were Spain, where we have already gone, Corsica, or the Shetland Islands. Martin then discovered that Naturetrek, a British tour company, had a trip to Belarus, departing London the day after the wedding. There were a number of birds there that we both badly wanted, including several woodpeckers and Azure Tit. We were a bit hesitant, as we usually do our trips on our own, or with a couple of friends. You never know who is going to be on a regular tour. It turned out that our worries were unfounded.

We met up with the tour group, our British leader, Barrie Cooper, and 11 other participants at Gatwick on May 5. We flew on Belavia Air, the official Belarusian airline. We had an uneventful flight. The aircraft was great. I won't mention their food, though. (Is meatloaf supposed to be gray?) We arrived at about 730PM and went through customs. At this time, Belarus no longer has visa requirements if you fly into Minsk. We met our in country guide, Istvan Pentek, and our ground arranger, Julia. Julia took us to change some money and we loaded up for a long drive to our first hotel, on the Pripiyap River in south Belarus. We arrived just before midnight. A Thrush Nightingale was singing loudly. We agreed to meet for breakfast at 8AM.

The sun rises very early this time of year in Belarus. We woke up early and I looked outside. There was some drizzle, but it didn't look to bad. We went down and had a substantial breakfast, a very substantial breakfast. We went out for our first walk, hoping to see our main target, Azure Tit. This bird is normally found in Asia. Belarus is on the very edge of its range. It is a gorgeous little thing, white, blue and black, by far the most attractive of the tits, at least to me. The other possible target was Eurasian Beaver, which is usually found near our hotel. 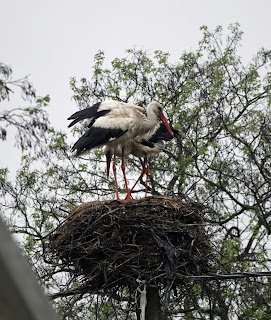 A pair of White Storks was nesting across the road from the hotel. Hooded Crows were flying into the trees nearby. A Eurasian Hoopoe, a crazy looking bird with a big crest, long bill, and fabulous markings flew in. We walked behind the hotel and were disheartened to see that the river bank had been torn up, doing some "improvements." We quickly realized that it was very unlikely that we would see any beavers. The drizzle increased a bit, but we kept on. Istvan said we would walk to the area where the tits had nested the previous year. It was maybe a third of a mile from the hotel. He ran ahead to check the area, and came back. For the first time in the trip we were stopped by a soldier. He seemed unwilling to let us proceed, maybe because of the construction work on the river. Istvan talked our way through and we walked down to the nesting area. On the way we spotted a couple of Eurasian Oystercatchers. It was really odd to see oystercatchers in a land-locked country, far from the sea. Unlike our oystercatcher, these birds are often seen in grassy areas, or on rivers.

The tits had nested in an electrical box the year before. Steven said we might have to wait a while before seeing them. I was not feeling particularly hopeful, thinking the construction might have put them off. Happily, I was wrong! We very quickly spotted the pair, flitting around in some willows. They were rather distant from the path, but we got excellent looks. I also got horrible photos. We were close to ecstatic to have gotten our biggest target out of the way. There were no beavers to be seen, but we didn't care. 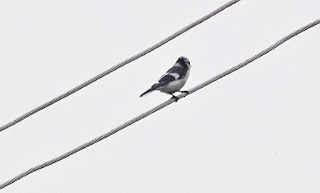 We then loaded up the van and went to the Belaje fish ponds, hoping to see one of my other wanted birds, Smew. This white duck is very difficult to see in the states, but a few pair nest at these fish ponds. The drizzle had become a light rain at this point. The road was blocked off, so we had to walk. The first pond held a couple of pairs of Great Crested Grebes, one pair doing their breeding display. We walked a bit farther and I spotted a Little Bittern, which flew out of the reeds. Great Reed Warblers were singing in several ponds. Caspian Gulls flew overhead. We passed another birding group, for the first of many times we saw them
on our trip. We walked down past several ponds and finally got our target bird, the Smew. We had both the male and female. Due to the rain, I didn't take any photos. I heard the first of many Common Cuckoos, which sound just like the clock.It was a bird I really wanted.

We ate lunch crowded under the shelter of a nearby bus stop. The rain continued. We then got back into the bus and drove to a nearby meadow, where we had a chance to spot mammals, as well as birds. Unfortunately, the mammals must have been staying inside having tea during the rain. We did get great looks at a Red-backed Shrike. Both White and Yellow Wagtails strolled along the road. We were all pretty wiped out from the very late arrival the night before, so we went back to the hotel for dinner.

Itsvan said the weather for the following day looked even worse with heavy rain and high winds. We were a bit disheartened. We went outside to check to see if maybe the beavers were around. As feared, the construction on the banks seemed to have pushed them out. Despite this, I was still very happy.