We woke up to bright sunshine and blue skies. It was absolutely gorgeous, the best weather of the trip. Of course, it was going to be a travel day, with limited birding. There were a few stops planned, so it wasn't going to be a total wash. We had our last breakfast at the hotel, still very substantial. We got in the bus and drove to Alshaney, where we had another chance for Azure Tit. We had seen a pair well the first morning, but they were a bit distant, so we were hoping for closer looks and photo ops. A pair of Long-tailed Tits flew by right after we got off the bus. We walked up a berm along the river and almost immediately had a pair of Azure Tits, quite a bit closer, but very uncooperative as far as photos went. 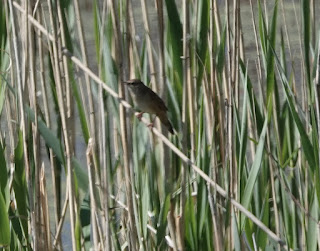 The biggest surprise was a Eurasian Nightjar that flushed and landed on a branch. Unfortunately, a pair of nest Fieldfares took umbrage and chased it off. Barrie spotted a Green-veined White butterfly, the a swallowtail flew by. A Brimstone sulphur butterfly landed on a discarded red piece of clothing. We walked further down the berm, where a singing Garden Warbler played hard to get. We turned and walked the other way to a reed bed, where a Savi's Warbler was singing. We got good looks, and I got terrible photos. Martin had stayed at the spot where we had the Azure Tit, hoping to get something good. Unfortunately, the pictures he got were not fabulous.

We drove several hours, passing through the city of Pinsk. We made a few stops, seeing a Crested Lark, both Lesser and Greater Spotted Eagles, and several other birds. We visited a Belarussian grocery store, where we all purchased our favorite new snack, mega chips, a large rectangular potato chip, sort of like Pringles, but much better! We arrived at our new hotel in the Bialowieza National Park, on the Polish border. The setting was amazing. We checked in and got settled for two nights, and headed down for dinner. It was the best meal of our trip, mushroom soup and a braised pork. We had a big day ahead of us, so it was early to bed!