I woke up well before the scheduled breakfast time. I was really nervous about the weather, as Istvan had said to expect heavy rain and winds. I peaked out the window and saw it was very gray, but not raining. I thought maybe the weather forecasters in Belarus were as inaccurate as the ones in the states. We got dressed and went down for breakfast. Belarussians like a big breakfast!  We finished, loaded the bus, and set out for our first destination, a small village nearby where Syrian Woodpeckers can be found.

It was spitting rain a bit and it was really cold and windy. We found the Syrian Woodpecker quickly. It was the first new woodpecker for me for the trip. Woodpeckers were high on our target list. We wandered around a bit more and had Black Redstart, sing Thrush Nightingales, Whinchats, and a few flashy European warblers. (Sarcasm alert!) It started to rain more heavily. 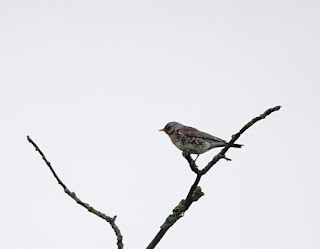 We went into town to do a little sightseeing to avoid the rain. We visited a lovely, tiny blue wooden church, packed with icons and perfumed with the scent of cut lilacs. May 7th is a holiday in Belarus, a day to honor the dead. The cemetery next to the church was full of people decorating graves, even in the rain. A much fancier church was across with the road, with gilded onion domes and shiny copper roofs. We visited a spot for shorebirds and saw a few, but the weather was still challenging, so we had an early lunch, including a shot of raspberry vodka. 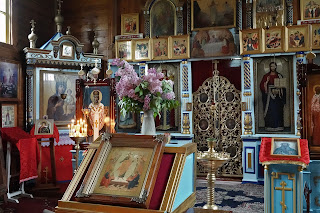 The weather had eased a bit, so we headed to another shorebird spot, a set of sewage settling ponds. It was about a quarter mile walk on a high berm, with the wind howling. Another group of birders was already there. I picked my way along, thinking I was sure to be blown off. When we got to the area where the other birders were, I almost jumped off the berm for joy. There were over 200 Ruffs, including breeding plumaged males of every possible color. I remember when I had my first field guide and I saw the illustrations of breeding plumaged Ruffs, I was smitten. It is amazing to be me that there can be so many different color combinations in the same species. I have seen female Ruffs a few times in Texas, but they are a bit nondescript. These males, some of the squaring off with each other, competing for females, were stunning. I took hundreds of photos. Unfortunately, due to the wind, I was not as steady as I should have been, and my photos are not fabulous, but I still treasure them! We also had a White Wagtail, several Yellow Wagtails, and a Citrine Wagtail. 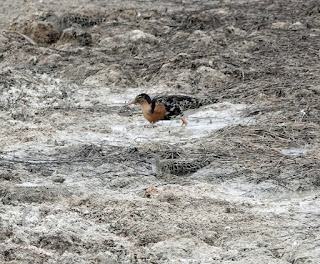 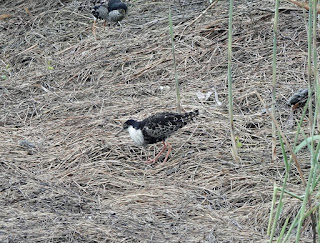 Then Istvan said we needed to go to the nearby banding station. They had a surprise for us. We pulled up to a little wooden house, and as many of us as could, crowded into the tiny room where they were ringing the birds. The rest of the group peered through the window. The main bander had two Terek Sandpipers they had caught and were getting ready to release. It was so cool to see these birds in the hand! They were much smaller than I expected, as birds in the hand always are. Sara, one of tour participants, has done banding in England, so they gave her on the of the birds to release. It flew off like a shot! One sobering thing was the water level by the station. Normally in spring the river floods and it comes right up to the house. This year it was a dry field. It was last year, also. It has been very dry. This has a negative impact on many of the breeding birds.

We walked down to the river and saw quite a few more shorebirds and I found a couple of Gargany. We had another couple of Terek Sandpipers. Martin found a Temminck's Stint and a Common Ringed Plover. White-winged and Whiskered Terns flew by. There was an Eurasian Oystercatcher on the river bank. In the states American Oystercatchers are only found right on the coast, usually on the beach. Belarus is far from any sea, being completely landlocked. Where was this bird catching oysters?

We returned to the hotel for dinner, but we weren't done for the day. We drove to an area near the river where Great Snipe breed. This was one of Martin's main target birds. He had seen one in the UK, years ago, but not well. I was really excited to see them, as well. They can be very tough to see displaying. You have to be there right at sunset. Sometimes the fields are flooded so much you have to take a boat. This time it was walkable, but it was a long slog, especially as we were trying a new kind of over-boot, which made it even harder. On the way out we heard a Corn Crake, which are very difficult to see. Martin and I were the only ones lucky enough to see it scurry across the road.

We finally got to the lekking area where the same birders we had seen earlier in the day at the Ruff spot,  were already set up. We had our scope, and the tour leaders had two more. The snipe run along little trails in the grass. Occasionally they will stick up their heads. If you are lucky you will see them jumping. Finally one was spotted. We all took turns looking in the scope, but it moved off. We kept looking. After a while, another popped up. After quite a long wait, everyone had seen one. The walk back seemed even longer and we were so spread out, we were not always sure we were going the right way. Simon, one of the tour participants, was kind enough to tote our scope back, as Martin's shoulder had given out and my knees were screaming. We were more than happy to get back to the hotel!