The weather promised to be better this morning. I looked out before breakfast and there was no rain! It was still a bit gray, but I was happy to take it. After breakfast we drove into the Azerani forest in the Pripyat National Park. We arrived and applied insect repellent, as Belarussian forests are full of bitey bugs. We we sternly warned to not wander off the trail and to avoid brushing up against vegetation, as ticks are a big problem. 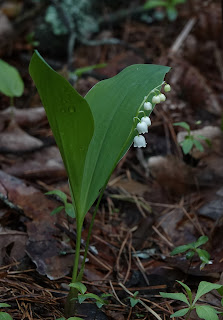 We started down a trail, and I was immediately distracted by wild flowers. Lily-of-the-valley was thick on either side. I grabbed a few photos, and hustled to catch up with the group. We spotted an Eurasian Treecreeper working its way up a trunk. Then one of the guides found one of my favorite birds of the day, a Red-breasted Flycatcher. A bit later we saw a Collared Flycatcher, another great looking bird. The first woodpecker of the day was a Great Spotted, one I had already seen in England. We heard a Gray-headed Woodpecker, but it didn't show itself. We crossed an open wet bog, where Eurasian Three-toed Woodpeckers are often found, but only had a Lesser Spotted, another bird I had already seen. Then we heard a wonderful song, an Eurasian Golden Oriole. We had glimpses of the bird flying over, but I only saw the silhouette.  A young White-tailed Eagle flew overhead. When we arrived at the van I was shocked to see a Black Woodpecker fly up out of the grass by a water filled ditch. We had gotten brief looks at one in Spain, but this was much better!

We left the woods to bird a riparian area, looking for Barred and Icterine Warbler and raptors. We did a lot of driving, stopping, listening, getting out and walking, but had no luck. The guides said it may have been too early, and they had not arrived yet. We drove out to a meadow, where we had a beautiful Black Stork soaring overhead. A beautiful Greater Spotted Eagle also circled above us. A black mini-bus pulled up with another group of birders that we had seen several times. (I commented that they were the evil birding group, like the meteorologists in the black vehicles in the movie Twister.) They told us they had seen a Barred Warbler right where we had looked earlier. We got back in our white mini-bus and retraced our steps. 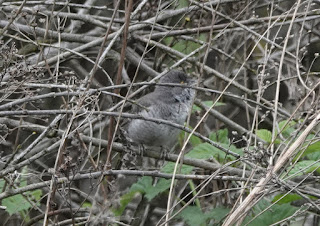 When we got to the spot we heard the Barred Warblers singing. Maybe they arrived five minutes after we left. They are a big honking warbler. It was difficult to photograph them, as they stayed deep in the brush, but I did get a few shots. A pair of Red-backed Shrikes jumped up, giving us even better looks than we had the day before. We worked the area a bit moer and were rewarded with fantastic looks at a Eurasian Golden Oriole at eye level! This oriole is nothing like our orioles in the states. They are much heavier, shaped more like a cotinga. I saw a bird back from the trail, deep in shrubs. It was a European Robin. I called it out, but no one seemed to hear me. I told our guide  Barrie later, and I don;t think he believed me. It was not where you would expect a robin, but I am certain.We got fabulous looks at a Wryneck, another species of woodpecker, though not a typical one.We did some more birding in the area and got one of our main targets, White-backed Woodpecker.. Then we got another target, a Middle spotted Woodpecker. 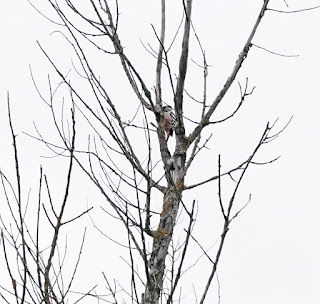 It was time to head back to the hotel, and we were going to take a shortcut. Rather than driving back the way we came, crossing the Pripyat by bridge, we were going to take the ferry. This proved to be a bit of an adventure. We pulled up to the river crossing and got off of the mini-bus. Istevan pointed out a posh hotel on the other bank and told us the ruler of Belarus, Alexander Lukashenko, had a summer house a short way up the river. Our driver tried to get onto the ferry and bottomed out. He tried another angle and finally was able to get on. We all followed and boarded. White-winged, Whiskered, and Common Terns flew over the river. The crossing was short and we disembarked. The mini-bus had an even harder time getting off the fairy. Finally after several tries, he succeeded. We made the short drive back to the hotel where we had beer, wine, and dinner.