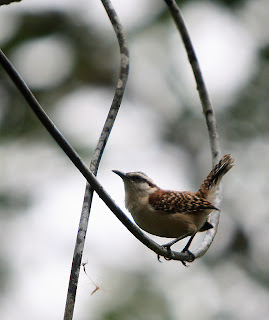 Sorry for the delay in my last blog entry for this trip. I was away for a few days in Big Bend.

My day at Punta Leona began very early, with a Ferruginous Pygmy-Owl calling outside of my room at about 3:00 AM. Luckily, it was a brief interlude. I woke up for the day a bit later than that and left the room to meet the rest of the group for a day of birding around the resort. Right outside the door a Long-tailed Hermit, a hummingbird, was feeding in the ginger growing by the patio.

We birded for around the hotel for a couple of hours, and then had breakfast. The open air restaurant was a great spot to see a few birds, but the big show was mammalian. First several Coatis came strolling by, very close to the tables. We were warned to not feed them, and I resisted temptation. They looked very healthy, so I think somebody was breaking the rules from time to time. Then a troop of White-faced Capuchin Monkeys arrived, including a mother with a very young baby on her back. I really struggled now to not slip them a few scraps. They didn't miss a beat; running up and snatching left overs out of the bucket the bus staff was scraping plates into. Patrick, our guide, bared his teeth at the mother, warning her not to jump up on his table.

We finally wrapped up and gathered our binoculars and other gear and headed out. We walked the main road into the resort, which I had mentioned in my last entry. Several trails go through these woods, and the birding can be very good. A Fiery Aracari hung high from an open tree branch. We very quickly found Black-hooded Antshrike, a bird confined to Costa Rica and Western Panama. Dot-winged Antwrens were quite common. I loved the Chestnut-backed Antbird, with the big blue bare area around the eyes, and this was just from the road! Henry pointed out a nesting box he had put up for the Scarlet Macaws and discussed the breeding population in the resort. Unfortunately, many of the boxes put up were upside down.

We reached one of the trails and headed into the forest. Our group was made up of people of varying ability, in terms of hiking and climbing. The trail had some steep bits, so we went slow, for which I was grateful! The sounds were incredible, especially the song of the Rufous-and-white Wren, which I want to add as a ring tone on my phone. A Rufous Piha gave us amazing looks. Several species of trogons  and two tinamous called. It was shaping up to be a great morning. On the way back we spotted a King Vulture wheeling in the distance.

Connie had planned for lunch outside the resort, then some beach time, followed by a boat tour of the Tarcoles River. We were having so much fun, we were bit late for lunch, which didn't allow for beach time, at least for the group I was hanging with. I was fine with this; I prefer birding to beaches any day! Four of us went together for lunch at a little restaurant owned by an Australian couple, across the road from the Pacific. It was so cool to see Scarlet Macaws soaring next to Magnificent Frigatebirds! We shared a round of margaritas and the conversation became even wittier and more intelligent, at least it seemed that way.

When we got back to the hotel it was almost time for the boat trip. We gathered at the restaurant, where we had nice surprise.  A couple of Gray-headed Tanagers announced the presence of an Army Ant swarm working the forested area next to the pool! A Tawny-winged Woodcreeper moved in. It was a small swarm and there were only a few birds, but it was still exciting.

The Tarcoles River is well known for the huge number of Crocodiles that live in its waters, but our targets were a few birds, most often seen on the river. Mangrove Hummingbird, Northern Scrub-Flycatcher and Boat-billed Herons are found on the river. It is also the best chance for Yellow-billed Cotinga. When we arrived at the boatman's place, we were delighted to find we were being joined by Richard Garriques, one of the authors of the Birds of Costa Rica and two men that he was guiding, who recognized me from Savegre Lodge.

The boat ride was great fun! Right out of the dock we got good looks at a Boat-billed Heron. A bit further down a large number of waders and shorebirds covered the sandbars. Common Black-Hawks were actually common. We pulled into a small creek mouth, where Mangrove Hummingbirds are usually found. Unfortunately, we never got a solid look at one. Several times hummingbirds shot through, but no one got decent enough looks to identify them. We then tried for Northern Scrub-Flycatcher, with equal bad luck. I did see some flycatchers on the opposite shore of the river, but I was not confident enough to ID them. Several times Plumbeous Kites soared overhead. Two Bare-throated Tiger-Herons, an immature and an adult, were on the bank. I did get one very important bird, at least to me, a Turquoise-browned Motmot. Yellow-naped Parrots perched in a dead tree.

We headed back to shore and split up into groups for dinner. My group found a great little seafood restaurant. The food was plentiful, cheap and very good! They did not have a liquor license, but one of the brothers who ran the place was happy to go to the store next door for cold beer. We finished up the meal with some great local ice cream bars. I was very happy to get to bed.

I am not doing a whole blog on Sunday morning, as I only had a brief time to bird before heading back to the airport. We were supposed to visit Carrara National Park, but there was some miscommunication, and the park opened too late for me to go. Some of us birded the road again, before breakfast. The biggest surprise was a Great Tinamou, that exploded in front us off of the side of the road. We also saw an Orange-collared Manakin, which we had only heard the day before. We enjoyed our last breakfast together.  I had to cut out a bit early, as the shuttle bus was coming to take me to the airport. I really wish I had more time to bird that area.

I enjoyed Costa Rica so much! I would love to return and hit some areas that I missed, particularly the Caribbean side and the northern area. I got a lot of birds for just one week. I end this set of blogs with a very serious suggestion- Go someplace! Don't be afraid to leave the USA. It isn't any more expensive than traveling in the lower 48 and it will change your life for the better.