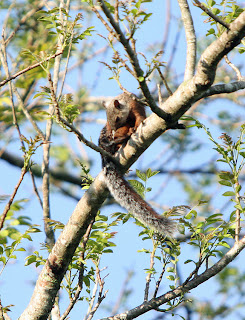 The Clay-colored Thrushes woke up early again! Who saw that coming? I was hoping to see Rufous-naped Wrens, which Connie told me, sometimes pick off bugs under the outside lights early in the morning. Either they weren't hungry, or I was too late. Pepito, the dog, was delighted to have me to hang out with for a while. We were leaving just before lunch time, to go to the Pacific coast, so I wanted to make the morning count.

I heard a loud, raucous calling up the hill from the house. The birds sounded familiar, but I just couldn't place it. I always have this problem in a new location. I walked around the edge of the house where I could get a better view and realized why it sounded familiar, but I didn't recognize the calls. A group of Gray-headed Chachalacas were foraging in a tree top. The sound was close to our Plain Chachalacas, but not quite. The Hoffmann's Woodpecker added his voice to the cacophony.

I returned to the back yard to take a couple of photos of the amazing view, when I spotted a Golden-hooded Tanager feeding in a fruiting mulberry tree below the edge of the yard. This surprised me, as I thought we were a bit high for that species. I later mentioned it to Connie and she said she had never seen one in the yard before. A young Cherrie's Tanager confused me a bit. I had another great look at a White-eared Ground Sparrow, unfortunately while my camera was inside on my bed. I did get a few photos of the Variegated Squirrels that make their home in the yard.

We got our suitcases packed and put in the car to begin our journey to the Punta Leona resort, on the Pacific coast, where we were meeting the Costa Rica birding club that Connie belongs to. Connie had put this club trip together, so she was very focused on getting there and making sure that everything went well. The group wasn't meeting until 3:30 PM, so we stopped for lunch at a beautiful spot on the way, Ama Tierra, which was owned by some people Connie knew. We visited with a lady from Chicago who was considering moving to Costa Rica. I don't know about her, but I am ready to go!

We lingered a bit over lunch and had to hurry to make our 3:30 PM meeting time. The road was twisting and it was not possible to drive too fast. Finally we hit the autopista (highway) and started making time. We crossed the Tarcoles River, famous for the large crocodiles, but didn't have time to stop. We were doing a boat trip on the river the following day, so I figured I would see plenty of crocs. Connie said the entrance to Puenta Leona looked like a What-a-burger, and she was right! When we pulled under the steep orange and white striped roof, I expected the guard to ask if we wanted fries.

The road into the resort is awesome! We drove about 3 kilometers in, with over half of it being good tropical forest. I couldn't wait to bird it! The resort is a mixture of hotel rooms, condos and houses. It is quite large and has an excellent white sand beach. We checked into our rooms and walked to the restaurant  to meet the others in the birding club. This was such a great group. I enjoyed every single person I met. Patrick O'Donnell, an amazing tropical birder, was our guide. Henry Kantrowitz, another excellent birder, who lives at Punta Leona, was co-leading.

We walked around the grounds near where our hotel rooms were. We had some great birds, right off the bat. Scarlet Macaws breed on the grounds, and we saw pairs and small groups flying over. Orange-chinned Parakeets also were seen and heard. Patrick whistled a Ferruginous Pygmy-Owl call to try to draw birds in. We were all a bit surprised when one answered back! We got great looks at it, as it flew in over head. Rose-throated Becards were everywhere, reminding me of yet another bird I had missed in Texas this year. I even added a new hummingbird to my list, Scaly-breasted. I was very happy to see a couple of antbirds; Black-hooded Antshrike was a life bird.

I returned to my room, where I met my room mate, Joan, who had arrived later than us. I absolutely loved her, and she seemed to like me. I was a bit relieved to tell the truth, as I can be a bit of an acquired taste. We walked over to join the group for "bocas", which are kind of like hors d’œuvres or snacks, sort of a pot luck thing. Connie arranged for us to have it in the restaurant, as long as we all agreed to order drinks. I did my part with a couple of glasses of red wine. I left to go back to the room and turned left where I should have turned right. I got a tiny bit lost, but it was worth it, as I saw a beautiful skunk along the path. I finally got turned around the right way, and found the room, which was on the path called Cuba. So, I not only visited Costa Rica, I went to Cuba, too!