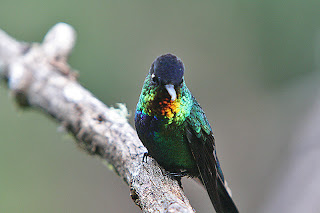 Sun rise comes early in May in Costa Rica. They do not observe Daylight Savings Time, so even though they are on CST, they are an hour behind San Antonio this time of year. I was wide awake and out the door a little after 5:00 AM. Clay-colored Thrushes had begun their incessant singing and Blue-and-white Swallows zipped all over Savegre's grounds. I walked down and met Melvin. We had a very busy morning ahead of us.

We began by walking into a wooded area next to the restaurant and bar, behind some cabins. We met another guide and a couple who lived in Monte Verde. We were looking, and listening, for Spotted Wood-Quail. The couple said they had heard them from their cabins before dawn, but didn't want to run outside naked to see them. I said "So, you're not hard core birders, huh?" Unfortunately, the quail were silent and not moving at all. The search wasn't in vain, though. We had great looks at both Large-footed and Yellow-thighed Finches. Ruddy-capped Nightingale-Thrush sang their chilling discordant songs. A Spot-crowned Woodcreeper scooted up a moss covered tree in full sunlight.

We walked down a trail out of the other side of the woods. It dropped down into another area of the lodge. Melvin pointed out a Dark Pewee in the top of a tree along the rushing creek. We heard an Ochraceous Wren singing and Melvin was able to coax it out. Melodious Blackbirds were singing across the creek. The weather was cool, but very comfortable. I was in shirt sleeves, though the others were in coats, hats and gloves. We went up for  breakfast, which was excellent, and got ready for the drive up hill. On the way we got great looks at a Striped-tailed Hummingbird.

After we left Savegre, but before we got to our main destination, we did some birding on the way. Melvin knew where an Emerald Toucanet was on territory. We got fabulous looks. The subspecies, Blue-throated, is a possible split.  Melvin heard one of my best birds of the trip, Ochraceous Pewee. We scanned the tree tops and I spotted it, almost buried in the leaves. A mixed flock passed by and I got even better looks at the Flame-throated Warblers.

Now, the name of my blog is "I hate Paramo, and Other Birding Stories", so it may surprise you that I had hired Melvin to take me up to the Paramo! For those of you who are not familiar with the term,  the definition of Paramo is - A high, bleak plateau or district, with stunted trees, and cold, damp atmosphere, as in the Andes, in South America. Sounds like a barrel of laughs, huh? Martin loves highland birding. I prefer lowland birding. I whine, at least internally, every time we go to the Paramo, which has its own particular group of birds. Yet, here I was, paying someone to take me up there.


There are not that many Paramo birds in Costa Rica, but it is the only place to see them. We also planned to bird our way down hill back to the lodge.  We pulled off the main highway, which is the highest point anywhere on the Pan-American Highway, at about 11,000 ft. The view was breath-taking! The weather was actually perfect, sunny and clear. We went a little way up a gravel road towards some radio towers, when we spotted several Volcano Juncos on the side of the road. With yellow eyes and dark "eye-brows", they look like the original Angry Birds. Melvin then heard one of the more difficult birds singing, a Timberline Wren. He called it out, though our looks were brief, they were clear. I was very happy.

I turned to scan the mountains that stretched out to the sea and caught my breath. I could see a beautiful cone shaped mountain with white smoke billowing out of the top. I asked Melvin and he said "Yes, it is an active volcano, Turrialba." I had no idea we would be sight of an active volcano. It is something I have wanted to see all of my life. It actually was a bigger thrill than the birds. There wasn't any lava or pyroclastic flow, but still, it was a real, live volcano! We walked around and did a bit more birding, seeing Volcano Hummingbirds, Slaty Flowerpiercers and more Volcano Juncos. Clouds starting moving in, and the possibility of seeing any other birds here was pretty slim.


There were a lot more that I wanted to see, so we started back down. We made a stop along the highway where Melvin had seen one of my most wanted birds, Black-and-yellow Silky-flycatcher. Unfortunately, none seemed to be present. A park ranger, a very nice, young woman, stopped and chatted with Melvin for a few minutes. The clouds were getting thicker and rain was threatening.


Melvin drove down the highway, past the road to Savegre. He said he knew a great spot for Fiery-throated Hummingbird. We turned on to a road that went to two hotels, Paraiso de Quetzal and Mirador del Quetzales. A hundred yards or so down the road, a man was cutting brush. A large branch lay across the road. Melvin stopped and spoke with the man, waiting for him to move the branch. He didn't. Melvin drove over the branch, and it got caught under his truck. The man did pull it out, and we drove on. I thought it was rather odd. Melvin explained that the two hotels were owned by brothers and there was some bad blood there. We were going to the other brother's hotel for the hummingbirds, so.... You get the drift.


We pulled up to the hotel restaurant, and the hummingbird feeders were swarming! Magnificents and the gorgeous Fiery-throateds were thick! Melvin went in to make arrangements and I started taking the first of many, many photos. Melvin came out and suggested we walk a trail behind the building. A sign, pointing to the trail said "Zeladonia", the old name for a difficult to see bird, the Wrenthrush. That alone was enough to get me going. We walked down hill on the trail and Melvin softly said "Black-and-yellow Silky-flycatcher!" A pair was perched very nearby. Unfortunately, it was very misty and I was not able to get clear photos, but I was still ecstatic! We started back up when we heard a Wrenthrush singing. I actually got decent looks at it, which more than made the day for me. It was very deep in the brush, so I wasn't able to get any photos, but I am not complaining.


We went back up to the hummingbird feeders and it started to rain. We were invited into the restaurant, where they had a covered porch with more feeders. The number of Fiery-throateds was beyond belief. They would flash their rainbow colored gorgets and chase endlessly. Magnificent Hummingbirds were also very common. It really was paradise. The owner came out to the porch with a big, untidy bundle of gray feathers perched on his finger. It was a juvenile female Resplendent Quetzal. The youngster had been abandoned by its parents and he was raising it. I feel rather uncertain about the fate of the bird, but I did enjoy seeing it. I actually held it for a few minutes and it rode on my shoulder when we went back into the restaurant. I never thought I would get to hold a quetzal!


It was hard to leave, but it we had a bit of a drive ahead and it was close to lunch time. We got amazing looks at Long-tailed Silky-flycatchers along the way. We glanced in at the quetzal nests from the day before. It was a bit of a toss up, but we decided that the wood pewee were saw was an Eastern. Finally, we got back to Savegre and Melvin and I parted company. He had been an excellent guide, and if you go to Savegre, I would highly recommend him. His last act was pointing out a Long-tailed Silky-flycatcher nest, with a chick in it, right by the reception area.


I had another excellent lunch, and went out into the rain, which had started again. Luckily, this time I had my rain jacket. I passed a flowering shrub, where Slaty Flowerpiercers and a female mountain gem were feeding. A juvenile Clay-colored Thrush was perched out visibly. I got to my cabin and birded from the porch again. Then I took advantage of the sound of rain on the roof and took a short nap. When the rain let up, I returned to the wooded area were we had looked for wood-quail. I still had no luck, but I did succeed in getting some decent shots of a young Collared Redstart. Even though most of the birding was done in the morning, I felt like I had a very full day!