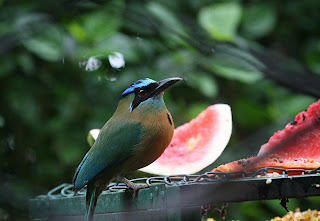 I woke up very early, hearing Clay-colored Robins singing quiet loudly, outside my open window. Connie and Dick like to sleep in, so I got up, at least trying to be quiet, and went outside. Their dog, Pepito, was very happy for the company. We walked around their beautiful yard, checking out the Rufous-tailed Hummingbirds and the gorgeous Blue-crowned Motmots. The hill up behind their house has bananas, oranges, and coffee. We walked up the drive and saw a very dark house wren and a Grayish Saltator. A Hoffmann's Woodpecker was calling nearby. I was hoping for a Fiery-billed Aracari, but I had no luck. I was very happy with a low flying flock of White-fronted Parrots.

I met Martin, their gardener, as I was walking back down. I introduced myself and we carried on a short conversation, with me using my very broken Spanish. Martin was very polite. When I said "Mi Espanol es muy mal." (Which I am not sure is even the right way to say it!) He insisted that my Spanish was very good. What a nice guy!

I checked the trees around the yard and was very pleased with the birds I found. Rufous-capped Warblers were common. Yellow-green Vireos were all over the place. I heard an unfamiliar song coming from a bare tree and saw a Yellow-throated Euphonia, a life bird for me. A bit later, I spotted a pair in some bushes near the house. A motmot came in to eat some watermelon, allowing me to get some decent photos. I certainly don't get these birds in my yard.

I went back into the house and Connie and Dick were getting up. We had a lovely breakfast, with coffee they had grown themselves! How cool is that? It was great, too. Connie pointed out a White-eared Ground Sparrow. I was a bit surprised to see a Blackburnian Warbler still hanging around. I thought they had all gotten up at least to Texas by May 10. After breakfast, I went back out and birded a bit more around the yard.

Connie had planned for a "down day", with no formal birding. We did take a trip into Puriscal, which was fun. I enjoyed seeing the town. I am afraid my memory is a bit clouded, so I don't remember the date, but the town suffered a very serious earthquake a few years ago. The church was badly damaged and still stands abandoned. At the time of the quake they were sure it was going to come down. It is a shame, as it is a lovely old building.

We drove to another town a short distance away, which my memory is also a bit vague about. I keep thinking the name is Barbacoa, but I don't think that is right. Anyway, they have a lovely church, which I went into. The walls were all natural varnished wood. It was really impressive. As we walked out, we noticed that there were men singeing banana leaves in an open garage type structure next door. The parish hall, also and open building, was attached to this structure and there was a group of people gathered around some long tables. They had an assembly line going, making tamales for the parish festival, which was taking place that weekend. We went in and watched the process. One woman would put the masa in a piece of banana leaf, then another would add pork, then it was passed on, and green beans, peppers and other vegetables were put in. The parish priest then folded it all up and another gentleman tied the tamales in bundles of two, to be steamed later.  The group was very welcoming. I really enjoyed meeting them.

We visited a friend of Connie's, who was getting ready to move. She regularly has wood rails visit her yard, but unfortunately, not while we were there. We did see a few Melodious Blackbirds and a Yellow-bellied Elaenia flew in, which was a new bird for Connie. I was seeing more and more why Americans move to Costa Rica! We returned to Connie's, where it started to rain again. I  birded around the yard a bit more, and enjoyed Connie and Dick's company. Despite being a non-birding day, I managed to get three life birds!