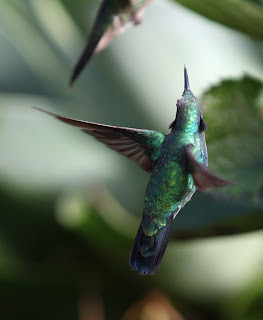 I had gone to bed with the sound of heavy rain, so I was very happy to wake up to a clear dawn. My driver was coming to get me at 11:00 AM, so I wanted to squeeze every minute out of the morning. Just walking through the gardens around the rooms was great. A Gray-breasted Wood-Wren, normally a really shy skulker, was out in the open picking bugs off of a "Hen and Chicks" plants. A White-naped Brush-Finch was out on the lawn. I finally got a decent photo of a female Scintillant Hummingbird. A young male Flame-colored Tanager let me approach close enough to get a couple of full frame shots.

I returned to the wooded area where the Spotted Wood-Quail are, but had no luck, again. Despite that, it was fun walking the paths. A Tufted Flycatcher was calling. I got the best looks yet at Flame-throated Warblers, and was still in love with the songs of the nightingale-thrushes. I glanced up in the tree tops and caught a flash of yellow. I moved and twisted until I got a decent look. It was a bird I thought I was going to miss, Black-thighed Grosbeak. I hunted and listened for Yellowish Flycatcher, which should have been easy to find, but not for me.

Speaking of thighs, a family group of Yellow-thighed Grosbeaks were feeding on the ground behind one of the cabins, as I exited the woods. I walked past the cabin and noticed a fluttering inside one of the lights on a post in the middle of the garden. A young Rufous-collared Sparrow had gotten inside the light globe, but couldn't figure out how to escape. I tried to free him, but couldn't figure out how to open the light. I went and got a workman who was remodeling one of the cabins. My Spanish was so broken, he just looked mystified. I finally took him over and showed him. He laughed and freed the sparrow.

After another great breakfast, I walked up to the area behind my cabin, where the lodge grows apples and peaches.. A couple and a guide were looking at some perched Sulphur-winged Parakeets in the orchard through a scope. I had seen a number of flocks going over, but never perched. They were kind enough to let me look. I then heard a Rufous-browed Peppershrike sing, and one flew up and landed in the open. This is one of those species that I have heard a hundred times, but have rarely gotten good looks.

I walked back down to the restaurant to look at the hummingbirds. The feeders were dominated almost totally by Magnificents, but a Green Violetear had snuck in. He would feed for a second or two and then one of the Magnificents would spot him and chase him off. The violetear would sit low on the rock wall and wait. I was able to see and photograph the "ear tufts" of the Green Violetear quite well.

I returned to my room and packed, very sad to be leaving. I went to the reception desk, parked my bags and went looking for just one more bird. I didn't see anything new, so I walked back to see if the driver had arrived. He was standing waiting for me, but I was distracted by a Yellow-winged Vireo, so close that I couldn't take a decent photo. I finally made it to the van, gave the driver my bags, and loaded up to go.

My driver asked me if I spoke Spanish, and looked very disappointed when I said not really. He said his English was very poor, but we got on fine. It took about two and half hours to get back to San Jose and hotel where Connie Sandlin and her husband were picking me up. We chatted about Costa Rica and I learned quite a bit from him. We finally arrived at the Quality Inn and I sat by the door waiting. A flock of Crimson-fronted Parakeets flew by, a life bird where I wasn't expecting one. Connie and her husband, Dick, arrived about five minutes later.

We had a nice drive back to their place in Puriscal. When we got close to town, we stopped for a late lunch of the area specialty, Chicharonnes. The food really was great, and we were serenaded by a Yellow-green Vireo in a tree right next to us. As we were finishing our meal a sudden rain storm moved in and we got slightly soaked running to the car. We drove the rest of the way to Connie and Dick's wonderful house.

The rain slowed down after we got into the house, so I did a bit of birding. A Blue-crowned Motmot was sitting on their clothes line! Rufous-tailed Hummingbirds zipped everywhere. Yellow-green Vireos were singing and there were, of course, many, many Clay-colored Thrushes. It started getting dark, so I came in and we spent the evening sharing birding story after birding story.  We were still full from the Chicharrones, so we just had some fresh banana bread and a glass of red wine for dinner, not a bad way to end a day!