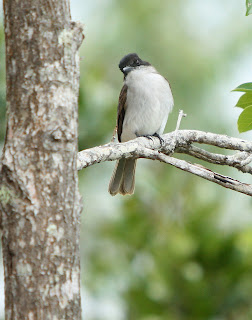 If you have followed my blog, you know that most of our birding trips are to South America. This trip was a bit different for us. We decided to visit Puerto Rico, which has the only tropical rain forest in the United States. There are 17 endemic species of birds, and a number of Antillean species. Martin and I have had limited experience in the Caribbean. We had one day of birding in Curacao, and I visited the Dominican Republic two years ago for a week. We knew we wouldn't get a huge number of life birds, but there were several that were "high value" birds for us, particularly the five hummingbirds.

We left our apartment at about 5AM on January 29. I spotted a "falling star', which fell slowly enough that I was able to say, "Martin, look!" and he actually saw it. We laughed and said it must be a sign, and hoped it was a good omen, though it might not be. After being thrown out of my seat onto the floor of the shuttle bus of the Parking Spot in Austin when the driver took a corner too quickly and having our first flight of the trip be canceled, we weren't laughing quite so hard! I do want to say, the only thing hurt by my fall in the bus was my pride and the airline accommodated very quickly. Neither of us is at all superstitious, but this did not seem good! Luckily, once we arrived in Puerto Rico, our luck took a dramatic turn to the better.

We started out early in the morning on January 30. We had spent the night in San Juan, but began our birding in the southwest part of the island. It was a pleasant surprise at how short a time it took to drive from one corner of the island to the other. The highway was every bit as good as any in the states. We did run into bad traffic in Ponce, but got through it fairly quickly with tempers intact. We turned north to the Maricao forest, where the roads narrowed, but were still quite good. The only problems we had were that the roads are not at all well marked in the smaller towns and we did have to ask for help a couple of times.

As we drove through Sabana Grande on our way to the forest, I got my first life bird, one I wanted very badly, Puerto Rican Woodpecker. This is a gorgeous bird, which looks like a cross between a Lewis's and an Acorn Woodpecker.  We also found an Antillean Mango, a hummingbird, which was new for Martin. I had seen several in the Dominican Republic, but who doesn't like hummingbirds?

We moved further up into the mountains. Martin had done a lot of research for this trip and knew of a spot 11 kilometers from Sabana Grande. We found the pullout and stopped. A Puerto Rican Vireo was singing loudly. Almost immediately Martin spotted one of our main target birds, Elfin-woods Warbler. This is an endemic species that wasn't discovered until 1971. It has a small population and can be hard to find. I didn't see it right away and started getting that panicky feeling. We worked really hard and finally I did see it and even got a poor photo. I found this bird one of the most difficult to photograph. It is unbelievably active and fast moving.

This spot wasn't just good for the warbler. Two Puerto Rican Tanagers were eating berries. We got good looks at the vireo. Pearly-eyed Thrashers zipped through. The tanager was joined by a Puerto Rican Spindalis. Then I found what was one of my favorite birds of our trip, Puerto Rican Tody. I do not care for the word cute, but I don't know any other way to describe todys. They are tiny little jewels, bright green, white and glowing dark pink. I had seen two species in the Domincan Republic, and was ecstatic to add a third.

It was hard to leave, but we had other spots to check. The headquarters of Maricao forest was nearby.  It is a lovely spot, with an amazing view of the Caribbean below. A Loggerhead Kingbird was singing on a tree branch just above eye level. His cooperation more than made up for the Elfin-woods Warbler camera shyness. We walked up the hill, but it had become really windy and the birds were all hunkered down.

We decided to drive up to the place we were staying at for the next two nights. In the past, most birders visiting this area stayed at Hacienda Juanita, just outside of the town of Maricao. We tried to book a room here, but discovered that the hotel was closed. This was disappointing for a couple of reason; first, the location was excellent for birding the forest. and second, it was a good birding place on its own, with Puerto Rican Screech-owls on the property. Maricao is a beautiful town, but it lacks hotels. I found a place called Maravilla Guest House, about a half hour north. It looked very interesting and had fabulous reviews on Trip Advisor. It is a very small facility, with a small cabin and a cottage, with a room. Margo, the owner, usually cooks vegetarian meals, but was not able to do that for us.  We booked the cabin and were anxious to see the property.

The drive from the main road to the guest house was a little bit rough, but doable in a regular car. We pulled in and were greeted by Elise, who was working on the property. She took us down the hill to the cabin. It could not have been better! Very isolated from the cottage and the other buildings, the cabin sat on a hillside in the midst of thick forest.  The top floor is still unfinished, with concrete walls, windows, but no roof. There are stairs up and an open porch. It put us right into the canopy.  Birds were singing all around us! The location is too low for the Elfin-woods Warbler and the Puerto Rican Tanager, but all of the other birds we had in the forest were there.

The living level is extremely open, with a kitchen, two bedrooms and a bath. The cabin does not have electricity, but there are battery powered lanterns and a propane overhead light. A hot tub is right outside the door. There is hot water. We didn't need air conditioning, the temperature was actually very cool in the evening. We were very pleased that there were no mosquitoes. I spent a little time in the hammock, while a Puerto Rican Emerald fed in the flowering tree above me. I can not say enough good things about this place! There is a small building up the hill from the cabin, with a stove, microwave and fridge. I would suggest, if Margo is not cooking for you, pick up food supplies before you arrive. The selection at the super mercado in the nearest town is extremely limited.

As it got dark we had invisible visitors near the cabin. Several Puerto Rican Screech Owls started calling. They were quite close, and made some incredible sounds. Unfortunately, despite our searching with the spot lights we brought, they remained invisible. The every present "coquis", small frogs that loudly say their name, called all around us. It was so cool and breezy, I had to use two blankets. I slept better than I had in weeks!

And here is my bird list for the day -