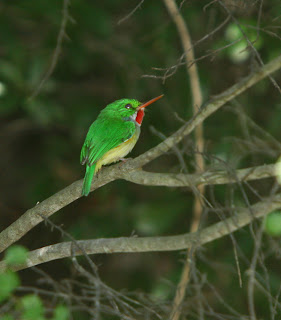 We really wanted a better look at the Puerto Rican Nightjar, so we got up at about 5:00 AM and headed back towards Guanica. Martin had found some information that there was a road that ran along the coast that could be good for them. The road was supposed to be busy, but the birds could be heard from shoulder. We found the road, but it was still too early. The nightjars only call for a short time in the morning, right before dawn. We did a little exploring, driving the end of the road, where it dead ended into a beach.

We worked our way back and came to one of the spots that was supposed to be good for the nightjars. The road was not at all busy, and  we heard the nightjars start to call. Martin flushed one, which flew right over his head. I saw the shape of the bird, but he got quite a bit of detail. We worked the road a bit more, but the birds totally shut up. We decided to give it one more shot at dusk and went on our way.

Our plan was to re-visit the dry forest reserve during the day, when we could drive in. Unfortunately, the gates don't open until 8:30 AM, so we had some time to kill. We drove back down the road, near to where it dead ended. There were several small beaches along the road and we stopped to do some sea watching. It is amazing at just how devoid of birds the tropical seas are.  We decided to look for a point that extended further out. There was a road that led to a bed and breakfast we almost stayed at, Mary Lee's by the Sea. We drove out and didn't see any good spots to sea watch. What we did find was a beautiful pink blooming tree. It looked like it might be good for hummingbirds, and sure enough, there was an Antillean Mango feeding actively. A Common Ground Dove was perched in the tree and a Puerto Rican Woodpecker was working the area. By the way, Mary Lee's by the Sea looked great.

We drove back to Guanica and headed back to the forest. We were able to drive in and went up to the headquarters and parked. We asked one of the rangers where we could find some butterflies. He pointed to a path that made a circle back to the parking lot. We walked the trail and did find a few butterflies, and there were birds. We got some fabulous looks at the Puerto Rican Todys. Martin and I agreed the tody was one of our favorite birds. Adelaide's Warblers were thick. Pearly-eyed Thrasher was very common. I added a life bird, Caribbean Elenia. We got good looks again at Puerto Rican Pewee. It was a very pleasant walk, despite the lack of butterflies.

We went back into town to grab some lunch. There are several American fast food places in Guanica, but I wanted something Puerto Rican. We found a little hole in the way place where we got the most amazing Cuban sandwiches. Neither of us could finish, the sandwich was so large. We also grabbed some bread pudding to take with us.  I was absolutely enamored with the food.

We decided to try for the West Indian Whistling Ducks at Laguna Cartagena, again. We got out the maps and figured a different way to get in. This time it worked. The road was a little rough, but at least it was a road, unlike the day before. We walked out to the observation tower. It was an easy walk, less than half a mile. As we reached the tower, a Loggerhead Kingbird flew out of a nest in the under-structure of the tower. We climbed the stairs and Martin very quickly found the whistling ducks, across the lake. There were at least 42 of them, which is pretty impressive, considering there are only supposed to be about 100 on all of Puerto Rico. A flock of Glossy Ibis were working the lake. We added a few duck species, including about 9 Masked Ducks working in a mat of vegetation. It was a great place! We walked back, and as we left the refuge, we saw a Merlin sitting in a tree.

We decided to go back and try another sea watch, while we waited for dusk and another nightjar search. There was a stand one the side of the road which had frappes. The sign had a long list of fruit flavors. We were a bit hot, so we stopped. I ordered mango and Martin got a pina colada, non-alchoholic. All I can say is I could live on these things! They were somewhat like smoothies, but much better. They both had big hunks of fruit in them. Jeez, I want one right now....

We returned to one of the beaches we had visited in the morning. We hadn't been there long when a young Brown Booby flew by, quite close to shore. We tried to make it into a Red-footed, but we just couldn't string it. Martin found several more Brown Boobies, way out at sea. Royal Terns and Magnificent Frigatebirds were feeding. More boobies came in, flying along the horizon. I think he finally counted 16. Texas isn't all that great for sea watching, so he was very happy. I spotted a sea turtle in the surf, but couldn't get enough detail on it to ID it. I also waded into the water,  just up to my knees, so I could say I had been in the Caribbean.

Dusk was approaching, so we headed back to the nightjar area. We parked on a pull out we had found in the morning and we waited. When it seemed like the right time, we walked down to the area where the bird had flown over our heads. The road now was fairly busy, which made me a bit nervous. It seemed like forever before we heard any calls. The birds seemed more distant. One was calling fairly near to the car. We walked down and it flew out, giving us decent looks. We spot-lighted the trees, hoping to get a perched one that Martin could photograph. but we had no luck. We were still happy.  We headed back to the hotel to pack to go to our last destination.

A great trip report and a beautiful bird. Happy Birding!