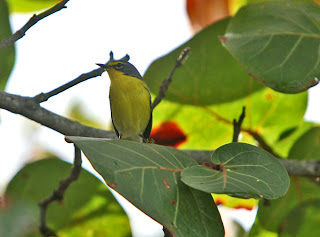 Waking up at Maravilla was bitter sweet. I loved this place so much, I really hated to leave, but we had a lot of ground to cover. We did decide to look for the Green Mango again, before we left, as Martin had not gotten great looks. We went up to the area around the house and sure enough, a pair of mangos chased each other right over our heads! Unfortunately, neither of us got any photos, but it was still fun. A Puerto Rican Emerald did allow me to get a very poor photo, but it was better than nothing. I said good bye to the two horses that live at Maravilla and we were off.

We were going to hit both the north and south coast of the island, with stops along the west coast. We headed north first, to check out some cliffs where tropicbirds and Red-footed Boobies had been seen by a tour group. On the way up, I spied a Zenaida Dove sitting on a fence next to the road. We had been looking for since we arrived in PR; after I found the first one, they were every where! The drive north involved us getting lost a couple of times, but there were some great people who helped us. Finally, we arrived at Punta Algarobbo.

As we pulled into the parking lot, we noticed that the sky was really threatening. We got out and almost immediately it started raining. Luckily, there were trees along the cliff, which kept us relatively dry.  We started scanning the sky over the waves below us and saw White-tailed Tropicbirds every where! We figured there were between 30 and 40. The rain stopped pretty quickly and the sky started to lighten. I walked down a trail through the trees and found an overlook where I could see the beach. I added the Little Blue Hero, that was picking along the rocks, to my list. This really was a spectacular spot.

I started back to the spot where Martin was still scanning. As I walked down the path, I heard an unfamiliar warbler song. I stopped and "pished", and was thrilled when an Adelaide's Warbler popped out. I was worried that this endemic warbler would be elusive. I also thought we wouldn't even have a decent chance for it until we went to Guanica. I went and got Martin, and we returned. The warbler was still in the area and put on a great show. After getting some photos, we returned to the tropicbirds for a while, and then packed up to head south, via the west coast.

Our first stop was just north of Maraguez, at a river mouth, were rare gulls have been seen the past.  Unfortunately, the only birds loafing on the sand bar were Royal Terns. We did pick up several species of shore birds. Martin was distracted by a Mangrove Darner (a dragonfly.) A few butterflies flitted around, but we didn't find anything particularly unusual. We decided to push on.

One of Martin's target birds was West Indian Whistling Duck. It is estimated that there are less than a hundred left on Puerto Rico, though they are found on other Caribbean islands. I had seen one in the Dominican Republic two years ago. There is a good spot just north of La Paguera, where we were spending the next two nights. Laguna Cartagena turned out to be a problem to get to. Martin had printed out a map, which was great, until we got to the road into the refuge. Actually, the word road didn't really apply. It was more like a goat path with a branches and trash scattered over it. There was another way in, but it would involve back tracking, so we decided to leave it for another day.

We drove the winding streets of La Paguera, and found our hotel, Parador La Paguera. This hotel had looked really great on the web page. When we pulled up we were a little disappointed. I think some of that was our enchantment with Maravilla. The hotel sprawls down the street, with the parking lot being about a block from the entrance. It was quite a ways to drag all of our luggage. Ironically, when we got to our room, it was right next to the parking lot, but there was no way in. I will say, the grounds were beautiful, backing up to a gorgeous bay. The pool looked good and the room was clean and decent. It just wasn't Maravilla!

After we lugged our gear in, we left to get our next target bird, Yellow-shouldered Blackbird. This bird is listed as endangered. It used to be wide spread across the island, now it is very difficult to find, except for one spot, which is not what you would expect. There is a little hardware store in La Paguera where Yellow-shoulded Blackbirds congregate. The store owners put out water and bread and the blackbirds come to feed in swarms.  The workers at the store were great! They led us out to a little porch and put the bread out early for us. The birds were everywhere. I took more photos of them than all the other birds put together. It was really fun to watch. We got some cokes and snacks at the store and left, so we could be in time for our biggest target bird of the day.

We headed east to Guanica, where there is a beautiful reserve with dry, scrub forest. This is the best place to get Puerto Rican Nightjar. This is a very rare bird, thought to be extinct for over 70 years. The bird calls for less than half an hour at dusk and dawn. There are areas of the reserve, where the trees meet over the road, where the birds are most likely to be. There is also a nearby road where they are found. It is vital to be there at just the right time. We drove over to Guanica and parked at the entrance of the park. The gate is locked at 5:00 PM, but you can walk in.

The nightjars can be found in several areas of the park. One of the best is right at the entrance. We were there right at 5:00 PM, hoping to talk to a park employee, asking for directions to the best places. Unfortunately, the gate was already locked. We walked in and debated on where to go. We could stay at the entrance and wait, or walk in and see what else we could see. We decided to walk in. It was uphill. Boy, was it uphill! We were pretty tired from our day of birding and travel, but we persevered. I was surprised at how thick the forest was. It was not like our scrub forest at all. It was difficult to see into the woods. Birds called all around us, but they were tough to see.

It started to get close to the time for the birds to call, so we started slowly walking back. About half way back we finally heard a nightjar. Then two flushed from the trees and flew right over our heads. More were calling as we finished our walk down. Unfortunately, we couldn't get any photos, but we were thrilled to have seen them at all. We made plans to return for the dawn show.