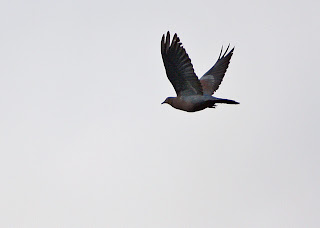 We had done so well at this point, we were running out of birds to get! We had three targets left, two hummingbirds, and Plain Pigeon. We had debated if we should even try for the pigeon when we planned the trip. I had seen it in the Dominican Republic, and it was, well, plain. We got up and were still discussing it. Finally we figured, why not? It wasn't that far off of the beaten track and we had no need to rush.

The best place for Plain Pigeon, according to the research that Martin did, was a baseball field near Comario. It was a little bit off the beaten track, but it wasn't too bad a drive. The road is twisty and turning, and we did have to ask directions. It seemed like there was a school every half mile and they all had traffic tied up, with kids arriving. A couple of birds, sitting on wires, looked like they might have been Plain Pigeons, but stopping would be tough. We finally found the ball park and were dismayed to find there was major construction going on. There was no sign of any pigeons, other than feral Rock Pigeons. We debated on going back and trying to see the birds we saw on the wires, but decided to walk up a side street and check around the houses. We walked up the hill and Martin spotted a Plain Pigeon feeding in a tree with orange flowers. These trees are all over the island and we never saw any birds in them. This one, however, paid off! The pigeon was more attractive than its name implies.

Now we had to make another decision. We really wanted the final two hummingbirds, but we had neglected the butterflies on the island. There is a spot in Coamo for Antillean White Butterfly, which is rather rare. There are some thermal baths in town with a small river running next to them. We found the spot and started searching. Unfortunately, it was sprinkling when we arrived, so butterfly activity was non-existent. Luckily, it cleared a bit and we found some skippers flying. We walked down to the gravel river bed and found a few more bugs. There were some Florida Whites, but not our coveted bug. Then I found a butterfly sitting on a gravel bank in the middle of the river. It looked good for the Antillean. I called Martin over, and sure enough, it was the right one. We were really happy! Unfortunately, being in the middle of the river, I didn't get a great photo. We went back up to the car, where we found a couple of hairstreaks, too.

We had lunch and started for Humacao Reserve. We were now ready for the two last hummingbirds, Green-throated Carib and Antillean Crested Hummingbird. These were actually my most wanted birds of the trip. The carib is a large hummingbird, with a de-curved bill. It is not very flashy, but I wanted to add a carib to my hummingbird list. The Antillean Crested looks like a cross between Woody Woodpecker and a hummingbird. I am always concerned about finding hummingbirds, especially when there are no feeders. I did not see a single hummingbird feeder in Brazil. The Mimosa trees, where they can usually be found, were not blooming. Neither were the Flamboyant trees, which they also like.

The reserve has a lot more than just hummingbirds. It is a good place to see Caribbean Coot, and sometimes, West Indian Whistling-duck. There are several lagoons, surrounded by trees. In front of the parking lot and across the road were a couple of the pink blooming trees, in which we had found the Antillean Mango earlier. We did a fast scan of the pink trees, but didn't see any hummingbirds. A couple of huge iguanas were in one tree near the car. We decided to walk into the lagoon area and add a few species to our trip list. It is a great place. The habitat was great. It is possible to rent a kayak, if you want to do it by water.

We walked in and started up the path between two lagoons. Another big iguana was on the path ahead of us. Martin was looking across the lagoon, when I saw three mammals run across the path behind the iguana. They were long and ran with the undulation of a weasel or otter. I called for Martin to look, but they were too fast. I made a mental note to ask the women at the kiosk at the entrance if they had otters.  There were some Caribbean and American Coots, so we were able to do a comparison. I found a couple of White-cheeked Pintails, which were new for the trip.

We walked back out and got a couple of cokes. I found out my "otters" were actually Mongoose, which have been introduced to the island. I was very disappointed. Martin walked over to the gate and scanned the pink blooming tree across the road. He quickly spotted a large hummingbird, the Green-throated Carib. Martin decided to go back into the park, to watch the other pink trees. I stayed put, watching the first tree. Shortly after Martin left, I spotted the Antillean Crested. I caught my breath, worried that we would have a repeat of the mango incidence, with me seeing it and it being gone by the time Martin got there. Luckily, that was not the case. We got reasonable photos of the carib, but the Antillean Crested was camera shy, and I only got a barely recognizable picture. Ok, it isn't even recognizable!  It shot off and we didn't see it again.

We left Humacao very happy and headed to the Ceiba Country Inn, where we would spend our last night. This lovely little bed and breakfast is in the north east corner of Puerto Rico. It is a good place for Puerto Rican Screech-Owl. When we arrived, it had started to rain a bit. It was dreary and misty. In spite of this, the grounds looked lovely. We checked in, got some ice cream from the lobby and got ready to go for dinner. The owner recommended a little restaurant in Farjardo, which is nearby. The restaurant was great. Martin got the mofongo, which has to be one of the best names for a dish ever. It is made with mashed plantains and pork. I had a grilled flank steak, which was great. When we returned to the inn, the wind was howling. Martin did hear the screech-owls, but had no luck seeing them. It was cool enough out, that we left the windows open, instead of the air conditioning. I was more than a little sad that it was going to be our last night in Puerto Rico.