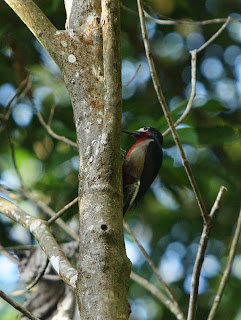 I had slept deeper and better than I had in ages. I stirred right before sunrise and heard the sound of the Puerto Rican Screech Owls. Martin was already outside, sitting on the porch. One of the owls had flown right over his head earlier. Other birds began their dawn chorus. I can't think of a non-cliched way to describe how it felt to be in that place. Paradise comes to mind.  I know, that is totally hokey.

I got dressed and we headed up to the main compound. Martin was already at the top. A Puerto Rican Oriole was singing nearby. We got a few glimpses, and then it was off. The evening before Martin had talked to Puerto Rican bird guide,  Gabriel Lugo, about where to look for one of our target hummingbirds, the Green Mango. Gabriel was extremely helpful and suggested we monitor the mimosas around the cottage. We got up to the top of the hill, when we heard a loud bird call which we did not recognize. Martin wandered around the back side of the tree it was calling from, to try and ID it. I stayed by the drive way, still working on waking up.

I saw a flash of movement and there was the Green Mango, feeding in some bougainvillea by the drive way. I got a good look at the bright green throat, the long de-curved bill and the wide tail. The bird was only there a few seconds and took off over the hedge. I called for Martin, who came running. Unfortunately, the mango was no where to be found. This situation was becoming an unfortunate pattern. There have been more a couple of times that I have found a hummingbird and it disappears before Martin can get there. We waited and waited, hoping it would return. It didn't. Martin went up to the main cottage and watched the mimosas, with still no luck.  I felt terrible for him. We did get better looks at the oriole, which was a small consolation. Finally, we decided we would go look else where.

The birding had been so good the day before in the Maricao forest, we decided to go back. There was a good chance we could find the Green Mango there and figured it was worth a shot. We parked at the forest headquarters again and walked up towards some antennas on the top of the hill. The ground was covered with Puerto Rican Calistos, an endemic butterfly. The wind was howling and there were rain showers off and on. The birds were not being very cooperative, so we started back down. Martin was a little bit ahead of me, when a pair of Green Mangos shot over his head. He didn't get a long look, but saw enough to ID them. I felt a definite sense of relief!

We returned to the place where we had gotten the Elfin-woods Warbler the day before and quickly found the flock. The warblers were pretty cooperative, as were the spindalis, and other birds we had the day before. We didn't see any birds we hadn't seen the day before, but we were still happy.  We drove back to Maravilla, stopping for lunch in the town of Maricao. By the way, Puerto Rican food is amazing! Between the incredible sandwiches made on a crusty pressed bread and the bread pudding, it is a wonder I didn't gain 20 lbs!

We got back to Maravilla and did a little "canopy tower" watch on the roof of the cabin. It really was marvelous, being right up in the tree tops. Birds were constantly coming in to feed on a fruiting tree. Martin decided to walk one of the trails and I stayed behind. After a while, he returned, very excited. He had found a Lesser Antillean Pewee, up near the main compound. I followed him up the hill and we searched the area where he had seen it, but initially couldn't find it. We walked further down the trail, past the spot where he had last seen it. We were about 20 yards down the trail, when we heard it call. We back tracked and got good looks. Pewees of different kinds have been a bit of a nemesis on our recent trips, so it was good to find one.

We had brought a pizza back with us from town, so we settled down at the cabin and waited for the screech owls to call. They did fire up after the sun set, but again, they were absolutely invisible.  I don't know how they could be so close and not be seen.