The farthest north I have ever been! 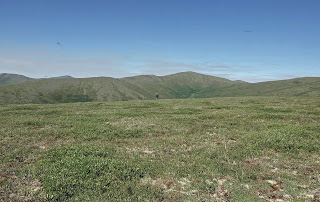 I checked the weather when we got up. It was perfect for butterflies, mostly sunny and low wind speeds. I looked outside and there was a pall of smoke over everything, due to the wildfire we had heard about near Murphy Dome, which was still burning, but where we were going was over a 100 miles northeast, up the Steese Highway, again. We stopped at a nearby grocery for lunch stuff and took off.

I had been wanting to do a bit more birding, and Martin still needed to see a Spruce Grouse, so we made a couple of stops. There was a promising looking road about twenty miles up the highway, with some woods, where we thought we might see the grouse. We had no luck with that, but did have several Varied Thrushes. Their song sends chills down my spine! There was a little boggy pond at the end of the road, where we heard a Boreal Owl calling. It was in an area where we couldn't see it, but we were still happy. 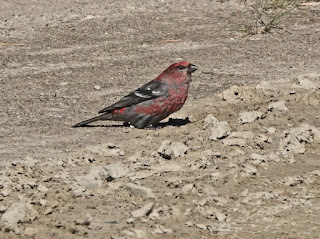 We drove a bit further on and noticed some birds at a puddle off the side of the road. We turned around and were delighted to find a male Pine Grosbeak and several White-winged Crossbills, neither of which we had seen on this trip. There were a few butterflies on the west mud, including a couple of Cranberry Blues, a species I thought was going to be hard to see before the trip, but had been almost common. We found another bog nearby, which Martin wanted to check for dragonflies. He didn't find the type he was looking for, but we found Dorcas Coppers, a new butterfly for both of us.

We saw a pond on the side of the road that looked promising for one of the dragonflies he hoped to find, Canadian Whiteface. There was a nice wooded area next to it with a little trail, so I could do some birding. I like dragonflies, but I always seem to be in the wrong place, and move too clumsily, and flush them, so I usually find something else to do while Martin looks. I was happy to see a few birds, nothing rare. Martin came back with a huge grin on his face, showing me his camera. He had found his target. 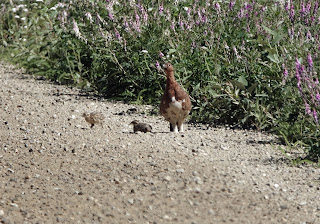 As we drove, we saw a shape on the side of the road. We slowed down, not wanting to flush what ever it was. As we crept closer we could see it was a Willow Ptarmigan, Alaska's state bird. I almost squealed when two little fuzz balls emerged from the roadside vegetation, very young chicks. We kept back to make sure we didn't upset them. They seemed completely comfortable with the distance. We watched as they poked around. Finally, they crossed the road, one at a time and disappeared. 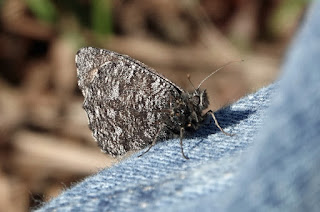 We pressed on to the area we had been to two days prior. We had not worked the 12 mile Summit area much, so we decided to give it a go first. There was a "trail" that consisted of single boards laid end to end up the hill. I started up it and flushed an arctic, a type of butterfly. It finally landed again on the board and we got a few photos. Unfortunately, the exposure on my photos sucked. Then it took off and landed on Martin's jeans, where I got a great shot. We puzzled over the ID, but it turned out to be a Jutta Arctic, which we had seen earlier in the trip. 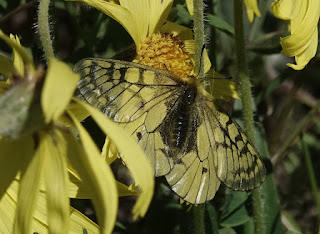 We proceeded farther up the road to the place where we had seen the Evermann's Parnassian. We hoped to see a female, or at least a less worn male. We were rewarded with a gorgeous male, almost glistening he was so fresh. He was very cooperative, even providing some under-wing shots. There were a good number of confusing fritillaries and sulphurs, which I am still trying to work out. The weather and the views were incredible. We were extremely happy with our decision to revisit the area.

We stopped at Eagle Summit briefly, but decided to go on, to see what habitat was down the road, and if it looked interesting, to drive on to Central, the next settlement on the highway. We went a couple of miles and saw that the road quickly dropped back into spruces and thought we would do better to turn around and look for some rocky habitat on the side of road, as there are a few butterflies that prefer that. As we turned around I realized this was the farthest north I had ever been, less than 100 miles from the arctic circle.

Not far back we found exactly the type of place Martin was looking for. On one side of the road was a rocky cut going up, on the other were rocks extending down the hill. Our hope was butterflies flying from one area of rocks to the other might stop and allow us to photograph them. We did see quite a few, but almost all kept sailing right on by. I heard an odd call, one that didn't sound quite bird like.It turned about to be a Collared Pika, a chunky little mammal that lives in rocks and loves to call. They look like big rodents, but are actually related to rabbits. I had seen American Pikas in Washington state and Colorado, but this was a different species.  Martin called out and pointed down the road where a Northern Wheatear was perched on a post. This bird is most commonly found in the "old world", but some do summer in Alaska and Canada. A second one was calling up the rock face. Martin was particularly happy, as this was his "spark" bird that got him started birding back in England. 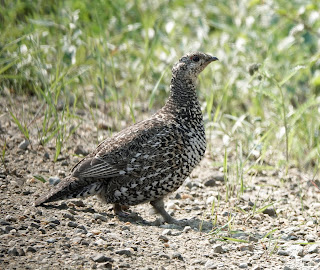 We started back to Fairbanks, looking for more rocky spots to explore. We saw a bird sitting in the middle of the road. We expected another Willow Ptarmigan. Again, we slowed down to a crawl. The light was a little harsh, but we could finally make out details as we got closer. There was barring. It was not a ptarmigan at all, but a female Spruce Grouse, the bird Martin really wanted to see. I had seen a few in Washington state years before, but despite searching for them several times in the past, it had eluded Martin. This is a bird that we expected to get in the forest, which is where I had seen mine. This one was out in the open, in an area where there were only scattered spruce in the fields on either side. It capped off the day for both of us!