And the midnight sun sets for us. 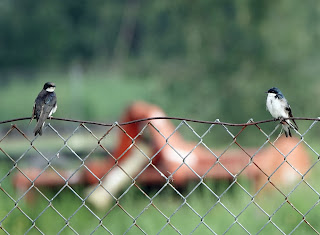 We got up and out the door of the Holiday Inn, which I recommend, and left for our last day in Alaska. We had pretty much ignored the town, choosing to go to locations away from town. There are a number of birding and butterflying spots around Fairbanks, so we decided to hit those before we left.

Our first stop was Creamer's Field Migratory Bird Refuge. This is probably the best known birding spot in Fairbanks. Previously a dairy, this location of over 2,000 acres, inside the city limits, draws both birds and birders. The refuge has water, fields, and forest. During migration the number of birds passing through can be impressive. Even outside of migration it is a great spot. One of the open fields by the entrance had a large number of Sandhill Cranes, and our only Canada Geese of the trip. Tree and Cliff Swallows were zipping everywhere. 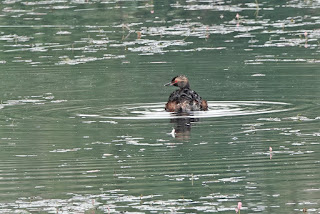 We walked back into a wooded area with a pond. This was a good decision as far as birds go, but we found quite a few of the famous Alaskan mosquitoes. We were very happy to find some Rusty Blackbirds, a bird whose numbers have dropped dramatically in recent years. A breeding-plumaged Horned Grebe was swimming in the pond, along with various ducks. Yellow Warblers were singing in trees all around us. Martin found four Hammond's Flycatchers. The mosquitoes finally won and pushed out to the fields, where we searched for butterflies, but did not see anything new. 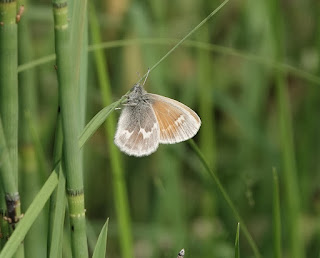 Martin had a butterfly location on Ballaine Road, on the north side of town. We found a parking spot and started hunting for bugs. We saw some of the same things we had seen before. I was happy to find a Common Ringlet, a bug I had seen many times before, but I really like them. I also, !gasp!, photographed a Boreal Whiteface, a dragonfly. It was already starting to heat up. After working the area for about an hour we decided to give some other spots a try. 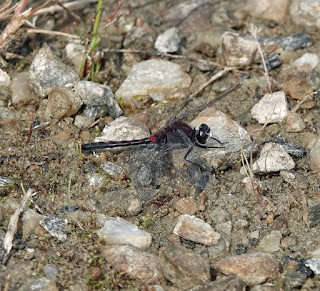 Our next stop was the Peat Ponds Wildlife Area. Martin was thinking it might produced some good dragonflies, and it is another site for breeding birds. We saw a few birds, but no new dragonflies. We then stopped at Smith Lake, part of the University of Alaska's grounds. It was quite a walk in, on a winding path through forest and fields. We got to the lake, but the nesting Mew Gulls weren't having it. One was diving at us over and over. We left them in peace.

The smoke from wildfires had cleared, so we decided to drive up to Murphy Dome again. I was very glad to be riding in an air-conditioned car. I was hot and feeling incredibly tired. The long days of the trip were taking their toll, and this was the warmest day of our trip, about 85, which is almost sweater weather in Texas, so I am not sure why it was bothering me. There was no sign of smoke as we drove up, so we thought maybe the fire was done. Boy, were we wrong! We couldn't even drive all the way up. The road was barricaded a mile or so down from the dome. A man stationed there told us it was off limits, the fire was worse, the wind was just blowing the smoke the other way. I couldn't believe it when Martin said "We only want to go up for a half hour or so." Even his magic English accent couldn't budge the guy.

We went back to town for lunch. We were both so beat we took a long time, not looking foward to going back out. This is not our usual method of operation.We finally felt a bit rested and went back out. I wanted to see a Musk Ox, even if it wasn't a wild one, so we drove by the Large Animal Research Station. We didn't want to do a tour, but we could see a couple of Musk Ox from the roadside. I wish I could have afforded to buy some of the yarn they sell there, but at $90 a skein, barely enough to knit a small hat, I passed. Musk Ox yarn, called qiviut, is considered one of the finest yarns in the world. If anybody has any laying around that they don't want, let me know.

We went back to Ballaine Road. Martin walked around for quite a while. I wimped out and went back to the car. He finally returned and asked me what I wanted to do. I had nothing. Neither did he. We decided to go have an early dinner and then maybe go back to the airport. We found a fast food place that was cool, had dinner and lingered for a lot longer than we normally would. I am not sure why we were so tired, but we both were done.

We weren't far from the airport and I knew there were some eBird hotspots nearby. We decided to go see what we could find. The first spot we tried was the seaplane float ponds. They are not visible from the road, so that was out. I remembered a pond by the car rental parking lot at the airport, so we headed over there. We found a place to pull over and scan the pond. There were the ever-present Mew Gulls, a few ducks, and a beautiful Red-necked Grebe. We called it a day, went and filled up the car and returned it. We were way early for our flight, but it was nice to sit, and to buy some over-priced trinkets from the gift shop.

I enjoyed this trip so much! Even with little glitches, it was an incredible experience. I don't know very many people, (maybe any?) who have been to Fairbanks for birding or butterflies. I would highly recommend it. You won't get a huge bird list, but we saw some great stuff. We ended up seeing 12 species of mammals and 74 species of birds. We are still working on butterfly IDs. The wildflowers were breathtaking. If you read my posts, thank you for taking the time!