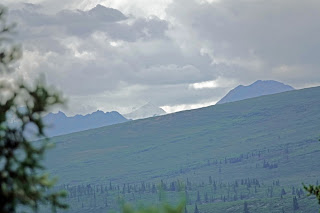 We weren't quite sure where we wanted to go when we got up in this morning. I suggested driving down towards Denali National Park, not thinking we would actually go that far. I had seen a couple of eBird lists that looked interesting, and there was the possibility of some different butterflies. Not far outside of Fairbanks we passed Skinny Dick's Halfway Inn, and snorted like two 12 year olds. Thank goodness we still have our adolescent mindsets. 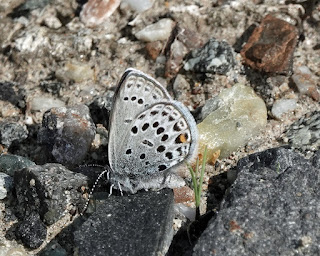 Alaska highway 3 runs along the top of a ridge south of Fairbanks, giving beautiful views on either side of the road. We pulled into a rest stop not far from Nenana and as soon as I got out of the car I heard a Boreal Chickadee calling. There was also an Alder Flycatcher and some Black-capped Chickadees. An Arctic White Butterfly skimmed by and then lit on some flowers. We also found a Western Tailed-Blue, a tiny bug, but still beautiful. There was a side road just past the rest area, so we decided to go down it and see what else we could find in the woods. The first bird I saw a Canada Jay, which had been called Gray Jay in the past. This was the first spot where the mosquitoes were a bit of a problem, but still not horrible. We drove a bit further down, but then spotted a guy on a bicycle laying a log across the road up ahead of us. He looked a little shady, like maybe he had a meth lab in his trailer, so we turned around.

We crossed a "braided" river by Nenana, which was flowing fast with muddy looking water. Braided rivers are fed by glaciers. I always thought of glacial water being clear and pure, but it's not. Glaciers pick up a lot of dirt and debris as they move, so that is mixed in with the melt. So, when you see bottled water claiming to be from glaciers, unless it's thick and brown, something has been done to it! We decided to press on to Healy, which is not far from the northern edge of Denali National Park. I found one of the roads where I had seen some birds reported. 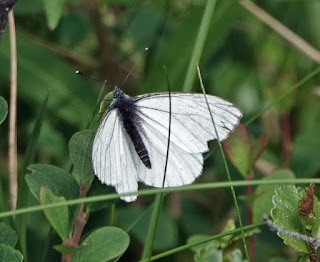 We drove down the road and didn't see much for the first mile or so. Then we found a power-line cut, which can be great for butterflies. We pulled off and almost immediately a utility truck pulled in on the other side of the road. Martin talked to the two workers, who were really nice. They told us to go ahead and walk there, they wouldn't be doing anything on the side we were one for a couple of hours. One of the guys told us which gas station was best in Healy and where we might get a peak at Denali. We walked around for about an hour and did find quite a few bugs, but most of them were "patrolling" and not stopping to feed. We decided to head further south towards the national park.

We stopped and picked up some food at a grocery store and talked to the clerk. We asked her about a location on the map called McKinley Park, which we thought was a park. It is not, it is actually a small town right by the entrance to Denali. She went on and on about this great strip mall to do some shopping down there. We decided, what the hell, we would go into the park and maybe stop to buy some trinkets at the shopping center. On the drive down we passed a couple of pull outs, where we checked for butterflies and saw a few. 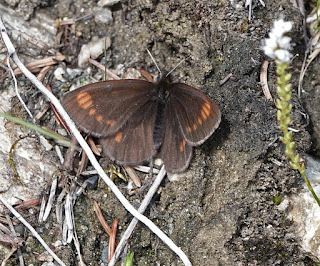 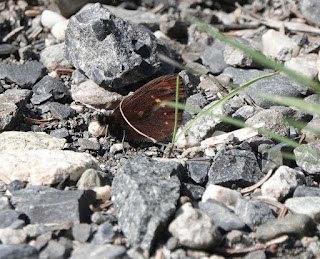 Denali National Park has limited access. You can drive in about 15 miles to one of the camp grounds; past that you either have to take a permitted bus. We stopped at the bus station right after we entered to see what was involved. We parked and several people were getting out of a car next to us. They explained the bus trips were at least eight hours, or longer, depending on which location you went to, four hours in and four hours out. The tickets were about $45 each, plus park admission,  Most people purchase them in advance, so there was no guarantee we could even get on a bus that day. It was about 1PM, so even if we got on the next bus we wouldn't get out of the park until 9PM. We decided to not do it, and just drive in as far as we could.

We drove down towards the camp ground, making some stops along the way. There was an overlook where you can sometimes see Denali. We were not sure which way to look, but asked a ranger, who gave us vague directions. The mountain is 72 miles away, so unless it is pretty clear, there isn't much chance of seeing it. We could see some mountains, but nothing looked like what we expected. To be honest the road was nothing like I expected. In my head, I had always thought it was straight and through a flat boggy area with some spruce. I have no idea why I though this. The road is actually a  bit twisty and there is some nice forest. We got to the camp ground, got out and looked for butterflies for a bit. We had hoped that we might see a bear or moose, but we didn't. The only mammal we found was a brazen Arctic Ground Squirrel, who looked fearless. 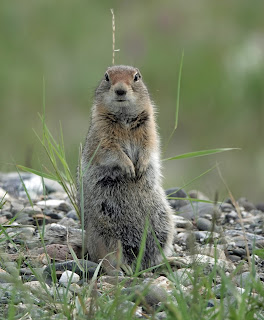 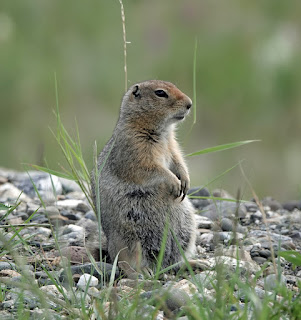 We turned around and headed slowly back to the entrance. We saw some more Canada Jays, and just enjoyed the park. We stopped at the overlook again and this time we were successful! At least we think we were. We could just make out a big mountain beak through the clouds. It came and went. I was really excited, even if it was not the best view. Only 31% of the people who visit the park actually see the mountain. Martin had seen it well on one of his work trips to Alaska, so it wasn't as big a deal to him, but he was still happy to get a glimpse. 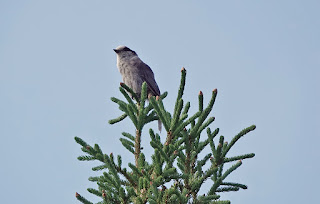 It was going to be a long ride back to Fairbanks, so we left the park. At least with the very, very long days, we didn't have to worry about driving back in the dark. It is about a two hour drive, so it wasn't awful. I will be honest, I don't remember much about the drive back, except when we crossed the Alaska. I was a little bemused, as Denali seems well within the interior. By the way, if the picture I posted is not Denali, that is cool. There is more on this later.