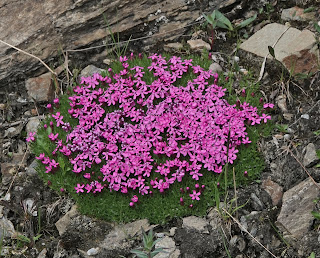 I laughingly named my blog "I hate paramo," because when we first birded Ecuador that habitat was cold and wet, and it was quite a slog to walk around. I also had a bout of altitude sickness. Paramo is looks quite similar to tundra, above the tree line, with stunted shrubs and plants. There were a few of differences, though, in walking the tundra in Alaska. First, it wasn't cold and rainy, second the altitude was much lower, 3,000 ft. as compared to 13,000 ft. Lastly, it was a little difficult to walk in some places, but not nearly as soggy.

We came to Alaska to mainly look for butterflies. There are a number of species that have restricted ranges in the north and use the tundra. I was also intrigued by the wildflowers of the tundra. There are even a few good birds found in this habitat. Our main butterfly target was Eversmann's Parnassian. Parnassians are usually found in mountain habitat and are white with some black markings and red spots. Eversmann's is the only one that is yellow. It also is in an area not covered by most people. Martin had really wanted to see this species ever since he started butterflying. I really wanted, to, also.

We started the day going up to Murphy Dome, near Fairbanks, where another couple of species were supposed to be found. We were a bit surprised when we got to the top and there were dozens of people milling around. It turned out there was a wildfire nearby. We asked if we could look around for butterflies and they said sure, just stay out of the way. Martin was also surprised by the vegetation. In Google Maps photos it had appeared very low and more grassy. It was now waist to head high willow and not really walk-able. He asked one of the fire fighters about it and he told us that the photos had probably been taken a couple of years prior and that tundra can change very rapidly. We did poke around for a bit, but we were not seeing what we expected. We could see the smoke from the fire a couple of miles away and decided to go a different direction. 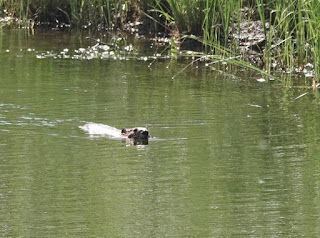 The Steese Highway runs northeast of Fairbanks. Highway really isn't the best description of this road, at least 80 miles or so along it. It turns to an unpaved road at this point, though it was not bad at all. We had a couple of spots marked for the parnassian, one called 12 Mile Summit, about 86 miles from where the highway starts, and Eagle Summit, about 106 miles in. The weather was a bit cloudy and became very windy, the farther we went, so it wasn't ideal for butterflies. We didn't dawdle much, heading up. The lower part of the highway passes through fairly open spruce forest. We did pause at a pond, where a beaver was swimming around, giving us good looks. We arrived at 12 Mile Summit and did a little walking, but not much was flying.  We decided to move up to Eagle Summit. 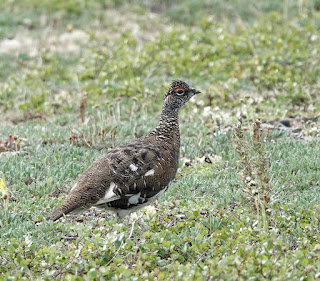 Martin had looked at Eagle Summit on Google Maps. He said there was a small building and a parking area. We drove up about as far as we thought it was and spotted a parking area. Who knows what had happened to the building? We  got out and walked up to the tundra from the parking area and got jaw-dropping looks at a Rock Ptarmigan, strolling by. I took a bunch of photos and little video. It finally scooted into the willows. I had seen the one in flight the day before, but this was much better! Martin went farther in, and I poked around the parking lot a little, since it was wet and I was hoping for "puddling" bugs. I found a hoof print of a caribou and a piece of fur in the willows. Unfortunately, I didn't see the actual caribou. I photographed a few flowers. 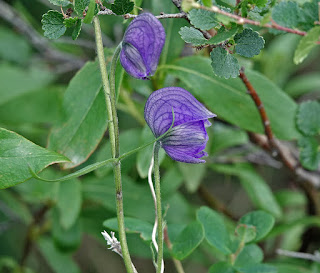 The sun was in and out and the wind was howling. It was far from ideal conditions. We saw a few frittilaries, which can be brutally difficult to identify, some sulphurs and alpines. Martin crossed the road to an area that was a bit more sheltered from the wind. I crossed over, too. He said, "If you see the parnassian, put your arms up like this!" I was picturing myself falling down the side of the hill with my arms up over my head, frantically waving as I tumbled down." I found my favorite flower of the trip, Monkshood, also known as Queen of Poisons, which is a way better name! I mean, seriously! If you eat this flower you can die within two to five hours. I love the drama, which is why I am calling this post Queen of Poisons. It sounds like we were in Game of Thrones! 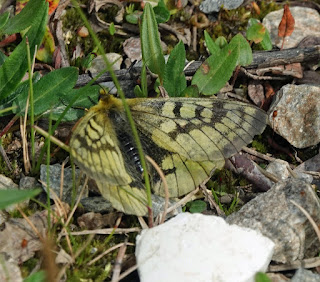 I looked down the hill and saw a pale yellow butterfly flying low to ground, right past Martin. It landed briefly and he shouted "It's the parnassian!" He did not raise his arms over his head, but I forgave him, since he shouted. I got over as quickly as I could and got some photos. It was a male, slightly worn, but we were ecstatic. My experience with other species of parnassians is they rarely land. This one flew, and then landed, flew and landed, over and over again. I think the wind was actually working in our favor. We saw a few more butterflies and decided to drive up the highway a bit farther.

We got in the car, and started driving. We quickly realized we had not been at Eagle Summit at all. We saw a sign and the little building Martin had seen on Google Maps. We stopped and walked around a bit. We didn't see much as far as butterflies, but a Common Redpoll was sitting up singing. We decided to return to the place that wasn't Eagle Summit and quickly saw another parnassian. We got a few more bugs and started to head back, figuring we could see some other bugs and birds in different habitat.

We were about fifty miles out of Fairbanks when the low tire light came on. This is not what you want on a deserted highway with no gas stations for at least 45 miles. Martin got out and checked and thought the rear left tire looked a little squishy, but not bad. We drove on and he checked again in about another ten miles. He said it definitely looked a little low. Of course there was no cell service. We kept on, checking the tire from time to time. Of course the first gas station didn't have a tire gage or air. We called the car rental company and they said to bring it in. If the tire was not fixable, we would be responsible. We finally came to a station and Martin put air in the tire. It still wasn't flat. We got to the airport and Dollar car rental gave us a new car. We called them a couple of days later, and it looks like the tire was fixable, so we weren't stuck with it. A good ending to the day!
Links to photos:
Butterflies of the day (please feel free to comment on my IDs.)-https://www.flickr.com/photos/sngcanary/albums/72157709413140541