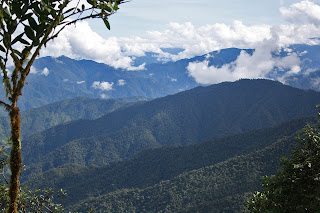 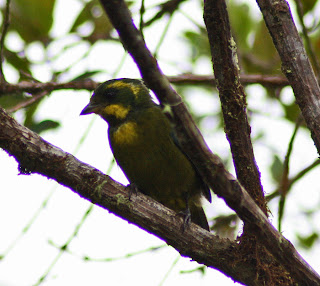 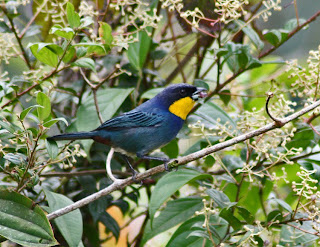 We got up early, as usual and got our stuff together. We had the luxury of two nights at the same hotel, so we only had to pack our birding and camera gear. With as much stuff as we were carrying we might as well have brought it all! I was a bit pokey, so Martin stepped out on the porch, where he heard a Tropical Screech-owl. By the time I got out the door, it shut up, of course.

The night before at dinner we had met Jhonier, a local guide that would be accompanying us both days that we birded this area. We were going into a protected watershed and the cooperative that manages it requires this. Jhonier was a great addition to our party. He is enthusiastic, speaks English and is good at finding birds. He also checked Edwin’s vehicle and determined that it could make it into the area. Usually its necessary to hire a local driver who has a less than comfortable vehicle. The first part of the road is brutal. We were really happy to keep Edwin. He was so much fun and a very good driver. Edwin is not a birder, but he had a keen interest in the places we went to and took more photos with his cell phone than I thought possible.

The area we were going to is called “Galapagos Road” or more properly the San Jose-El Palmer Road. It has varied elevation from the pass at 2,100 meters to a low point on the other side of 1,350. Technically the road drops even further, but the forest becomes fragmented and Jhonier had not birded below this. Its only been birded in the last couple of years and it continues to produce great surprises. In the Choco region, it has birds that are present in parts of Ecuador, but can be very difficult to find. Martin and I both feel that this road could become one of the premier birding sites in South America.

We maneuvered the first 5 kilometers, which consists of deep extremely slick mud and terrifying drop offs. Edwin breezed through like it was no big deal, though we did fish tail a tiny bit at one particularly nasty spot. The first birding spot is a beautiful rushing stream where we heard Beautiful Jays. Jhonier told me it was a great spot for butterflies later in the day when the sun was up. We wanted to get up to the pass fairly early, so we pushed on.

We did make a couple of quick stops on the way up. At the first spot a female Bicolored Antvireo came into the tape. This was one of our targets, so we felt encouraged. Dan and I spotted a Tawny-bellied Hermit, which is pretty common, but I like hermits. Pablo began his “trolling” with his i-Pod for Tanager Finch, which has seen there in the past. Unfortunately there was no response. He also tried for Olive Finch, which is found in the area. No luck with that one either.

There were two tanagers we were really hoping to see, Purplish-mantled and Gold-ringed. Purplish-mantled has a much larger range, all on the west slope of the Andes in Colombia and a piece of Ecuador. It is a spectacular looking bird, with a brilliant yellow throat contrasting with the purple and blue on its head and back. Gold-ringed has a tiny range and is also a very attractive bird. Both of these were much wanted additions to our life lists. We found the Purplish-mantled rather quickly, soon to be followed by the Gold-ringed. We ended up seeing more than 20 of each. It’s an odd feeling to say “Oh, its just another Gold-ringed Tanager.


We got to the pass. It was a bit cold because of the altitude, but the morning sun soon warmed it up and the vista was breathtaking. The mountains that spread out around us were covered in almost totally unbroken forest. In Ecuador we had seen nice tracts of forest, but never this large and so seemingly untouched by man. It was more than impressive. We ate a light breakfast and began working the area for birds. A White-tailed Hillstar perched nicely for photos. Birding was a bit slow at this location, so we decided to move down the other side to the lower elevations, where most of the prize birds are found. Weather can change very rapidly so it’s important to take advantage of the good times.

We parked near a small religious shrine and scanned some trees with tiny white flowers. Indigo Flowerpiercer loves feeding on these. Sure enough, within a few minutes we saw a flash of blue. This bird has an unusually shaped bill that it inserts into the base of flowers, feeding on the nectar. There are several varieties of flowerpiercer. We had actually seen some of them on this trip, but this one is a near endemic, and difficult to find. Its deep blue body and bright red eyes make it one of the most attractive ones, as far as I am concerned.

I fell in love with the song of a small bird, a Munchique Wood-wren. This is a bird that was only described as new for science in 2003, though Steve Hilty observed them in the 80s. This bird has one of the best bird songs ever! Typical of wrens, its very loud. It has almost a goofy cadence. Dan said he could just picture some 9-year-old boy walking down the street whistling it. He said they should replace the Andy Griffith theme song with it. I am working on downloading it for a mobile phone ringer. We did see the bird, but the song was the killer part of it all.

We dropped a little further down the road to another shrine and parked again. There was a beautiful overlook. Dan said “You know it’s funny, we haven’t seen any hawks or eagles yet”. Seconds later Pablo spotted a bird soaring far below us in the valley. Initially he thought it was a Solitary Eagle, but we finally got enough detail to see it was a Barred Hawk. I turned to Dan and laughingly said “We haven’t seen any eagles or hawks.” And probably a minute later we heard a scream. A pair of large raptors flew up over us, sparring. It was extremely difficult to get much detail on them. Martin got some distant photographs. We discussed the ID of these birds on and off for the rest of our time there. We actually thought they were two different species, as one was obviously larger and appeared to be shaped differently. When we got home Martin sent the photos to Bill Clark, the noted hawk expert. He said they were a pair of Ornate Hawk-eagles, the female being the larger bird.

Fog started closing in, so we decided to see if it was clearer on the other side of the pass, where we had come up. We did stop at the pass where Pablo played the tape again for the Tanager Finch. A mixed flock was working the area and despite the extremely poor visibility due to fog, we found several Fulvous-dotted/Star-chested Treerunners, a bird that Martin desperately wanted to photograph. Unfortunately the conditions didn’t allow this. We continued birding down the road towards El Cairo, stopping again to try for Beautiful Jay, without success at the stream crossing. We arrived back in El Cairo anxious to return for a half day of birding in the morning. It was great to sleep in the same bed that I had the night before.

What a great birding day! I love the scenery and the pictures.