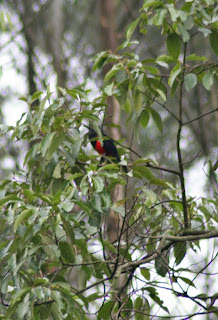 I am giving this title to my trip blogs because almost every single person I told that we were going to Colombia had the same reaction, “Really? Is it safe?” usually given with a horrified look that suggested I was telling them that I was going to rappel down the inside of an active volcano. Yes, Colombia is safe. Gun battles between cocaine cartels no longer echo in the streets of Medallin. FARC rebels are confined to a few small areas, mostly on the borders of Ecuador and Venezuela. We felt safer than we do on the south-side of San Antonio. I hope I can impart just a little of the amazing character of this wonderful country.

We arrived in Bogota on August 22 at 9:00PM, two hours late due to weather delays in Miami. The flights were pretty stressful, inspiring Martin to say, “That’s it! We are going to think long and hard before we do another flight. I have had it!” (The last several trips we have done have had glitches, some pretty serious) We were also upset to find out that our good friend Dan Peak, who was supposed to join us in Miami for the last flight had been bumped and wouldn’t be arriving until the following afternoon at the earliest.

We were met at the airport by a cab driver that our guide for the week, Pablo Florez Valencia, had arranged. Hector, the driver was great! He and Martin chatted on the ride into town in both English and Spanish. We felt much better. The drive into Medallin is spectacular. Set in a bowl on the western slope of the central Andes, the city with thousands of lights is spread out below you as you come over a mountain pass. Pablo met us at our hotel and despite the late hour, took us to a fabulous Italian restaurant a couple of blocks away.

After a few hours sleep we got up at 5AM to start out birding. Right outside the hotel a Black-billed Thrush was singing. Of more interest to me was a huge bat hawking insects in the street light. We met our driver, Edwin, who has a great 4x4 6 seat SUV. We took off for La Romera, a protected watershed on the south east side of Medallin, pausing for a quick breakfast at a nearby bakery. (I could easily blog about the food in Colombia! Its fabulous!) Our target bird was, believe it or not, a grackle. But this is no ordinary grackle. We were looking for Red-bellied Grackles, a Colombian endemic and a very attractive bird!

The road into La Romera is steep and winding. We were there on a Sunday and it was fairly busy with recreational walkers and cyclists, but that was no problem. We parked on a slope and I spotted a Sickle-winged Guan in a tree across the valley, my first life bird of the trip! Pablo played a tape of the Grackles and to our delight they quickly responded. We saw at least 15 in our time there. We searched long and hard without success for Yellow-headed Manakin. We were still very happy, as the grackle is not an easy bird to get. I was also pleased to get an Emerald Toucanet almost on eye level and a Rufous-naped Greenlet, two other life birds.

Dan was arriving at 2PM so we headed out towards the airport after a snack at the same bakery where we had breakfast. We did a little birding near the airport with some success. The elevation was rather high so we moved slowly. My ankle, which I broke in Panama in March, was bothering me some, as it did through out the trip, but it was more a nuisance than anything else. Probably the best birds we had there were Whiskered Wren and our first Golden-fronted Whitestarts.

We got to the airport, where we were relieved to see Dan arrive. He cleared customs easily and we took off for the town of Jardin. Our original plan was to bird around Jardin, looking for the rare Yellow-eared Parrot, but we realized we couldn’t make it by dusk as its about a 3 hour drive. We birded some along the way, picking up Bar-crested Antshrike and a few other birds. We arrived after dark at a really lovely resort hotel on the outskirts of the town. After dinner on the patio, we retired, ready for an early start.