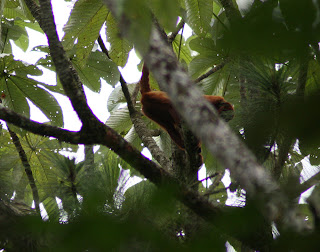 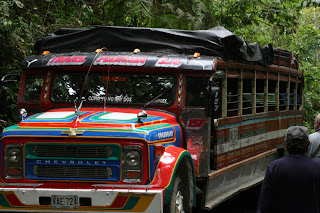 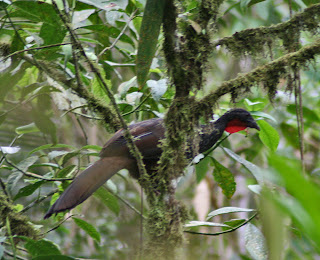 Our main destination for this day was Ucumarí Nature Reserve. Driving up from La Florida we saw a rushing river with a Torrent Tyranulet sitting on a rock. We did a cursory search for Torrent Ducks, but didn’t see any. We began our birding at El Cedral, a mule staging station, in the park, where the drivable road ends, and worked our way back down to La Suiza. As a side note, it is possible to hike up to the paramo for some “mega” species like Crescent-faced Antpitta and Indigo-winged Parakeet, but it’s a long difficult hike, and our time was limited, so we declined. (Yes! No paramo!)

We walked the road at a leisurely pace, while Edwin followed with the car. It was an easy walk. Other than dodging the occasional chiva, the colorful local buses, we pretty much had it to ourselves. The forest surrounding the woods was beautiful. There were numerous small streams crossing the road and we could hear a rushing creek from time to time to our right. Many butterflies were “puddling” in the wet mud wherever the sun shone through. Wild ginger scented the air. Even if there had been no birds it would have been a fabulous walk.

Luckily that was not the case. Not long after we started our walk we found a mixed flock working high above the road. The light was difficult. Most of the birds just looked like silhouettes. I was straining my eyes, trying to get some detail on a tanager, when I realized it had a bright yellow head. Then I saw the dark spot on the cheek and the incredible blue body. It was the bird I most wanted at this location, Multicolored Tanager. We knew they were found in the park, but they can be difficult to find. The flock actually had two! Unfortunately neither of us got usable photographs, but I was more than happy.

A little later we saw a dark shape fly across the road in front of us. It was our second goal bird, Red-ruffed Fruitcrow. In spite of its name, it’s not a crow at all, but a cotinga. It’s a large dark bird with a red breast and most amazing red ruff around the neck. Martin did get a good photograph. http://www.martinreid.com/Misc%20website/CO09RedruffedFcrow.html
We ended up seeing several on our walk. This is probably one of the most reliable spots in Colombia to get it.

We also found a Cauca Guan, another endemic and were able to get some photos. A Crested Ant-Tanager played hide and seek with us. Martin and I both got poor, but recognizable photos. (Though I have to say mine looks like a Cardinal!) The incredible butterflies along the way constantly distracted me. I definitely took more butterfly photos in this park than any other place we visited. I also got pulled away from the birds when Edwin called on his mobile and told Pablo there was a troop of Red Howler Monkeys back by the car. I left Martin, Dan and Pablo and limped as fast as I could back about a quarter mile. I expected them to be gone, but they were still there. I tried to photograph them, but the only recognizable shot was less than flattering to the monkey.

We arrived at the community center, where we had lunch, just as a torrential rain began. It was perfect timing! Lunch was great, the rain stopped and we moved on back towards La Florida, birding along the way. We paused at the river, where we had checked for Torrent Duck earlier in the day. This time we had better luck. Martin spotted a male sitting on a rock. We moved down to get a better view and discovered a female and some ducklings in a small backwater pool. The black and white striped ducklings were really cute.

We had another long drive ahead of us, so we took off. We had to pass through Pereira, a fairly large city. It was not my favorite place in Colombia. The Lonely Planet book had little good to say about it and I concur. It was rushed and confusing. We took a wrong turn and ended up way out of our way. Finally we made our way out. We passed the Cauca River on our way and two Green Ibis flew over the car. Unfortunately Dan missed them. Dan and I spotted a dark raptor sitting on a fence that puzzled us. Martin suggested it might have been a Snail Kite.

We arrived in El Cairo after dark. The hotel we stayed at was on the edge of town and quite comfortable. The family that owns it has two great sons, one about 5 and the other 8. Sebastian, the younger boy, was delightful, very friendly and open. I did not try my poor Spanish on him, as I didn’t think he could bring me a beer either. We had dinner in a nice little restaurant off of the city square and then retired for the night.

Sorry I haven’t been signing these!
Sheridan Coffey
Posted by Sheridan at 6:37 PM