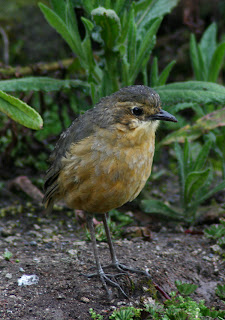 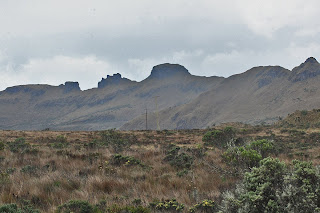 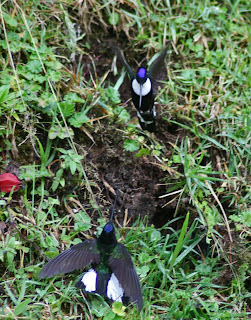 Despite the Spartan accommodations at Rio Blanco, I woke up refreshed and ready to go. We had a great breakfast and headed back up the hill where we had finished the day before. We parked at a site where workers maintain a water distribution system. Pablo played a tape and a small flock of one of my favorite birds flew in, White-capped Tanagers. These are really spectacular looking birds! Unfortunately my photos were probably the worst I took on the trip, which is saying a lot! Here is a link to a couple of Martin’s photos from my first trip to Ecuador. http://tinyurl.com/n9koml. While in this clearing we also had a flock of migrating Plumbeous Kites go by almost on eye level. Beryl-spangled Tanagers (my favorite tangara!) were working the trees on the edge. Some Andean Siskins flew over.

We walked a beautiful forest trail along a ridge. The trail was level, well maintained and quite easy. We heard one of our target birds, Chestnut Wood-quail, but never got even a brief look. Antpittas and tapaculos were calling from every side. We finally saw a Slate-crowned Antpitta, which we had only heard the day before. We had killer looks at Black-collared Jays. While looking at the jays a gorgeous Crimson-mantled Woodpecker flew distracting us with his antics on a hanging vine.

We drove down to the building where we stayed the night. I was able to take a little time to photograph the hummingbirds while Pablo and Edwin packed the car. The hummers we saw were all widespread species, but it was fun photographing them. We witnessed a bizarre interaction between two Collared Incas. They were obviously fighting. One bird flew to the ground and lay there with his wings and tail spread out. I thought he was injured or possibly dead. The victorious bird sat for a while on a stick above him. When the dominant bird flew off, the loser got up and started to fly away. The other bird came back and the submissive bird went down on the driveway. He eventually flew off, appearing perfectly well.

About 11AM we departed for our next stop, the paramo on Nevado del Ruiz. When someone says “tropical birding” I think of steamy rain forests full of palms, tree ferns, orchids and twining vines. The paramo is not that. Paramo is the area above the tree line. It is full of stunted bushes and plants. It is always cold and usually foggy and rainy. I get chilled even thinking about it. Its one of Martin’s favorite habitats, probably because its just like England! Not so much for me… It does have a very interesting avian community, including many hummingbirds. It’s hard to think of something as seemingly fragile as a hummingbird thriving in this harsh environment!

We drove up to a weather station/café to look for our target bird, Bearded Helmetcrest. It had started to rain, of course and I wasn’t looking forward to trudging around in it. Despite wearing long underwear, a turtleneck, a wool sweater and a rain jacket I was still cold. Luckily the weather station had a covered porch where we sipped coffee and watched the flowering bushes for movements. A female helmetcrest flew in within a few minutes! As we were watching her, a Tawny Antpitta strolled around, allowing me to take my best antpitta shots ever! We eventually saw a really nice male helmetcrest. Martin got some great photos!
http://www.martinreid.com/Misc%20website/CO09Helmetcrest.html

We left the weather station and drove on to look for our other target, Rufous-fronted Parakeets. We grabbed lunch at a hotel where they have hot springs. (Nevada del Ruiz is a volcano, which erupted in 1985, killing 23,000 people in the village of Armero) We were driving along some farmland, looking at old lava flows when we heard the unmistakable sound of parakeets. A flock of eight Rufous-fronted flew by! This is an extremely range restricted bird, so we were more than happy. We also picked up Black-thighed Puffleg, another high altitude hummingbird.

We left the paramo (yea!) to start the drive to our next destination. It was a long drive on winding mountain roads. We soon lost the light and were in fog off and on. It was pretty nerve wracking. The roads are narrow and muddy. There are no guard rails and steep drop offs are common. We came to a village and were stopped by a group of soldiers. They asked the men to get out of the car, but I was allowed to stay. One soldier came over to my open window and said something in Spanish. I became flustered and started babbling “Estoy una Americana aqui por parajos y mariposas. Photography!”, lifting up my camera. The only other Spanish I could think of was to order two beers and ask for a bathroom. Somehow I didn’t think he would be impressed. He looked unamused, shook his head and walked away. The men got back in the car and we progressed.

We were supposed to have stayed at a lodge in La Suiza, which is in a state run park. Unfortunately the concession for the lodge had run out. Pablo secured a small guesthouse for us in the town of La Florida. The accommodations were not what we expected. Pablo did find some other rooms, but we were too tired to move, so we settled in. I will say that the food the owner of the house prepared for us was some of the best food of the trip!