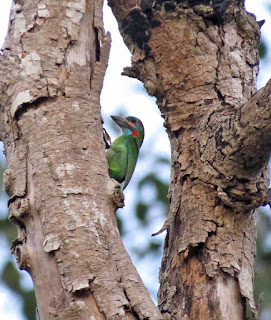 We were completely switching gears from shorebirds and waders to hornbills and barbets at Kaeng Krachan National Park. This fabulous national park, the largest in Thailand, has a wide variety of birds, being on the northern border of many southern species and the southern border of many northern species. It also has fabulous mammals, including many elephants, primates, and, even tigers! It is one of the best places in Asia to see leopards. I had seen videos of masses of butterflies at the stream crossing. We were very excited to be there. We had an early breakfast at the lodge, eggs and bacon for Willie and Martin, and a bowl of pork and rice soup for me, a typical Thai breakfast. The lodge packed us box lunches of fried rice or noodles and we took off.

The sun was rising on the drive to the lodge and we saw our first Oriental Pied Hornbills before we even got to the gate. Martin had told me he wasn't all that interested in hornbills, but this sighting changed his mind. There are several species of hornbills in the park. They are all spectacular and all in trouble as far as populations go in Thailand. Since elephant ivory is much more difficult to obtain now, hornbill ivory is being substituted. We got our tickets and drove through the gates.

I had read a blog from another birder who had recently been in Thailand that woodpeckers were extremely difficult to find. We were really pleased when Dave found a Great Flameback almost immediately after entering the park. A bit further down the road he heard a Great Slaty Woodpecker calling. We located a pair, which flew into a near by tree, screaming and displaying. This is a huge woodpecker and one I really wanted to see. We also had Lesser Yellow-naped Woodpecker. 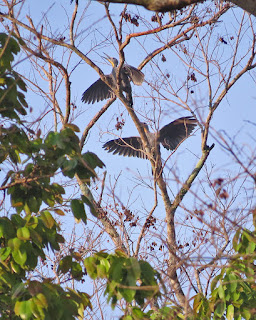 Dave pointed out a very large pile of elephant scat. Unfortunately, this was as close as we got to any. Just beyond it, our first Red Jungle Fowl ran across the road. These birds are the progenitors of our chickens and are amazingly gorgeous. A Common Muntjac, a species of small deer, walked past a pond that we were scanning. We added more species of bulbuls, flycatchers and a Slender-billed Oriole. A Velvet-fronted Nuthatch, by far the prettiest nuthatch I have ever seen, eluded being photographed.  Masses of butterflies swarmed on the mud at stream crossings. The deeper we got into the park the more blown away we were by the habitat.

We couldn't linger long, as we had to reach the Ban Krang campsite. The road above this site is narrow and access is time limited. . We got to the camp grounds, did a little birding, seeing Asian Fairy Bluebirds, a beautiful Thick-billed Pigeon and a few flycatchers. A troop of Dusky Langurs, one with an infant, which are bright saffron yellow, came through. We used the rest rooms and started up the narrow road. This road is rough and requires high clearance. We were amused to see a French couple attempt it in a regular car. I can't imagine that they got very far.

We happened on a White-handed Gibbon, quite close to the road. We were lucky, as they can be very shy. I was able to get a little video clip of it eating. We also saw more Dusky Langurs. The French couple had made it in farther than we expected. We told them about the gibbon by the road, which was still nearby. They shook their heads and said "No! Langur!" as gibbons are difficult to see. They were very pleased to be proven wrong. https://www.youtube.com/watch?v=GQt8Vf1ztB4

We expected birding in Asian forest to be very difficult. The birds are shier, no doubt, but with Dave's expert help, we did really well. One of the most wanted group of birds for us, was broadbills. Some of them are crazily colored and we were not too disappointed. We had three species, Silver-breasted, Banded and Dusky, but I was not able to get any photos, due to light conditions and poor photography skills. A Great Hornbill flew over, the flap of his wings sounding like a train passing by! Martin was becoming even more enamored. We heard Gray Peacock Pheasant calling, but Dave said you can be three free from them and not see them, they are so secretive. I count heard birds, but I was a bit disappointed to not see one.

We worked our way back down to the camp ground, where I realized just how good a very cold diet coke can taste. The park has very strict time restrictions, so we didn't have too much time. There is tent camping there, but after dark, campers must stay in that area, as roaming elephants are extremely dangerous. A woman who was walking alone at night on the road had been killed a few weeks prior. We did manage to see a Violet Cuckoo, a bird we had not thought likely, making us very happy! We drove out of the park to our lodge and enjoyed Thai beer and great Thai food.