Wow, I Didn't Expect to See That Bird! 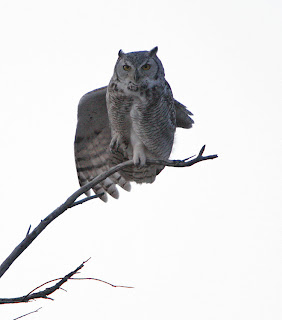 We discussed where we wanted to start the day. Martin was pulling for Frijole Ranch to try again for the titmouse and Willie wanted to go back to Red Bluff. The winds were supposed to increase through out the day, so we decided that we should hit Red Bluff before they got out of hand. Red Bluff Reservoir is one of the best birding spots in Texas that hardly anyone visits. It the desert of west Texas water is at a premium and Red Bluff has plenty. It is way off the beaten track, but we try to get there at least once a year now.

We set up on the west side of the lake, where there is a picnic ground. The light was good and the wind was not bad at all. We quickly saw a handful of Common Mergansers by the dam. There were also some Hooded Mergansers and a few Red-breasteds. It is tough in Texas to find all three species in the same spot. Willie spotted a pair of Red-throated Loons; there was a pair two years before and we thought they might be the same birds. There was a massive raft of ducks at the north end of the lake. As they moved closer we could see it was almost all Common Mergansers. Martin and Willie estimated at least 1.900, which is more than any of us had seen at one time.  We decided to hit the east side of the lake, but were deeply disappointed to find the Sandy Beach area gated and locked. There is an huge amount of fracking going on around the lake, so we wondered if the land owner wanted to keep the workers out.

We went back around to the other side and scoped some more. The wind was picking up and it was fairly cold. We decided to hit the north side of the lake and drove down to the other entrance. As we were driving towards the lake edge a black, gray and white bird shot in front of us, a shrike. The bird lit and we were stunned to see it was an immature Northern, not the expected Loggerhead. We drove in as close as we could, but the bird was very skittish. Martin and Willie walked out into the field, circling around in order to not spook the bird, but trying to get a bit closer. I stayed at the car, in case it flew back to its original perch. Unfortunately, it eluded all of us, but Martin was able to get some record shots, which he has posted on his page. http://www.martinreid.com/Main%20website/NShrike.html The photos of our bird are on the bottom of the page. This bird was the first Northern Shrike recorded in the Trans-Pecos in 25 years! With the birds we had seen in the Panhandle in December, it was the seventh one in about a month. Considering we had never seen any in the state before, we were "gobsmacked", as Martin would say. When we had returned from the panhandle in December, I mentioned that with all of the birds we had seen, it looked like it was possibly going to be an irruptive year. With one that was seen in north central Texas yesterday, it appears that I was right.

We decided to spend the night in Alpine and started driving south. We made a stop at Lake Balmorhea, where we were very happy to see 37 more Common Mergansers. We hadn't seen any on this lake in a couple of years. Two Green-tailed Towhees popped up to check us out, glowing in the late afternoon sun.  We drove to the north side of the lake, where Western and Clark Grebes were in good numbers. The sun had set, so we started to head out. We were thrilled to see a Great Horned Owl sitting up on a dead tree. Any owl is nice, but this one was special. Tripp Davenport had found it a couple of months earlier. It was almost white, instead of the normal gray or brown. We had looked for it in November without any luck, so we were really happy to see it! It allowed us to get quite close and get decent photos, despite the low light. It almost trumped, but not quite, the Northern Shrike, as bird of the day.
Posted by Sheridan at 5:56 PM