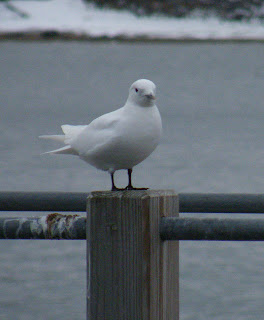 There are so many things I enjoy about birding. I love observing different behaviors. I love the feeling of accomplishment when I am able to identify a sparrow or a shorebird that was a challenge in the past. I love knowing where migrants came from and where they are going. I love feeling connected with the natural world. I also love chasing.

If you are not a birder you probably have no idea what I am talking about. Chasing, or twitching, as they call it in the UK, is when you hear about a rare bird that has turned up and you jump in the car with whoever you can find that wants to go and make the trip to see it. It might involve driving all night. It might even involve flights if you have the money or the frequent flyer miles. It is usually for a bird you have never seen, though I have chased birds that I just want to see again.

Why do I do it? The main answer is in the title of this blog, because it's fun. The trip out is always a mix of excitement, anticipation and dread that the bird won't be there. If you have the right companions the conversation is all over the map, usually about past chases and produces laughter to the point of tears. (If you don't have the right companions, you will at least have some stories to tell later about how awful they were, which can also be fun.) You have an excuse to eat fast food that is bad for you, but you secretly love, drink too much coffee and maybe even drive a bit too fast.

When you arrive at the spot, you look for other birders and the conversations start. Have you seen it? Was it seen yesterday? Where? Hopefully, it is easily seen and you can relax. Many times you have to work for it. There is nothing like being the first person in the crowd to see the bird early in the morning. The elation is almost palpable. On some chases it takes a long time. People trade cell phone numbers and go off looking in likely places nearby. If you phone rings, your heart almost stops. Sometimes you realize you aren't going to see the bird. That sucks. Big time.

In spite of that, it is still fun. It is great to run into old friends. The sense of camaraderie can lead to making new friends. Maybe someone is there you have always wanted to meet, a birding celebrity. (The fame of birding celebrities is pretty limited, by the way.) You can either share the joy or the agony. Information about other birding spots is exchanged, new equipment is discussed, even a little gossip is spread.

Another thing that happens is you get to bird in an area you normally don't get to visit. I really love it if it is someplace I have never been. Many times the influx of birders results in more good birds being found, something birders refer to at the Patagonia Picnic Table Effect, http://en.wikipedia.org/wiki/Patagonia_picnic_table_effect. The longest chase we have ever done was for an Ivory Gull in Plymouth MA. We had never even talked about doing a trip to the Boston area in winter, but because of the chase, we not only got the gull, but saw a bunch of alcids, a ton of gulls that we rarely get in Texas and some seals! (I don't just like birds and we don't get seals in Texas.)

Anyway, the reason I am writing this is I have seen a lot of disparaging remarks about chasers recently.  Today on Texbirds there was a post about woodpecker behavior that said "Not for chasers and listers", like we are so shallow that we don't care about other aspects of birds and birding. I would never think of adding "Not for people with bird feeders" or "Not for biologists" on my posts about rarities. I have seen people rail against chasers for any number of perceived sins, like not finding their own birds, being competitive and valuing their lists too much.  I say to these people, "So what? I enjoy it. I am not going to let your snobbishness spoil my fun."

Very well said! And I love running into you!

Very well written. I agree with everything you said!

While it is true that some chasers can go too far in the pursuit of the object of their birding desires, I believe that rarity chasing is one of the most important elements of birding. It generates appreciation, and appreciation can influence culture, conservation, and politics. A bird that is held by many as valuable will be viewed as valuable by the majority.

I laughed out loud! You nailed the chasing experience and emotion and the odd fun that just happens. Well done!

I think the haters are just jealous they don't have the time, effort, or resources to chase the rarity! Or their lists are too small... Well written article Sheridan!