The final chapter: Somtimes you have to do tourist stuff, May 6-7 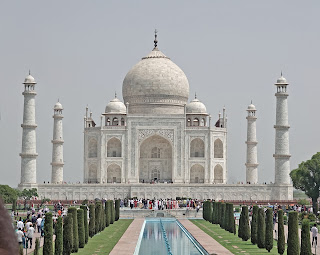 The next step to our trip home had come. I got up before everyone else and did some birding around the camp. I didn't find anything new, but it was still nice to see and hear most of these birds for the last time. We had breakfast and then took off for the airport at Guwahati to go back to Delhi. The drive must have been pretty uneventful because I remember very little of it. 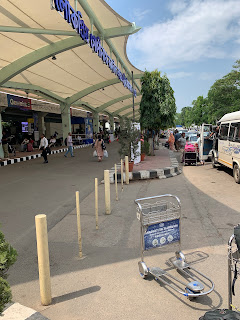 We arrived at the airport in plenty of time for our flights, Willie and me going to Delhi, and Mike back to Bangalore. We got through the lines and spent our time talking about the trip and what we would be doing in the future. We enjoyed Mike's company so much. I was sorry to have to say good bye. Mike has a web site by the way, https://bubobirding.com/. I would highly recommend checking it out.

Willie and I flew back to Delhi on Air India. We scored exit row seats, which was great! It was much more comfortable than our SpiceJet flight when we first arrived. The flight took us over Nepal. Willie had the window seat and he said "Look! Isn't that Mount Everest?" I leaned over and looked out the window and we could see the top of Everest sticking out above the clouds! I never thought I would get to see it. Even from a plane it was amazing.

We were staying at the Holiday Inn near the airport. I arranged with the hotel to have a car pick us up, rather than dealing with a taxi, which I understand can be challenging in Delhi. We met the driver and we quickly arrived at the hotel. I have never seen security at a hotel like they had there. Before we entered the hotel grounds security guards checked under the hood and the trunk, I guess for bombs, and this was the hotel's car! Then before we entered the hotel our luggage had be scanned like at the airport. We checked in and went up to our rooms. This was by far the nicest Holiday Inn I have ever been in. We were both amazed! I would HIGHLY recommend it if you are in Delhi. It was comparable to some five star hotels I have stayed in. I had a very rare steak for dinner and a nice glass of red wine. I had missed my red wine terribly!

Our original plan for the following day was to arranger for a birding guide to take us around Delhi. Willie and I had discussed this before we left home and decided we really wanted to see the Taj Mahal instead. I contacted Asian Adventures and they set us up with a driver and guide. It is about a four hour drive to Agra, where the Taj Mahal is, so we had to leave at 5AM. The driver was there right on time. We were extremely glad to have an air-conditioned car, as there was a horrific heat wave in Delhi, and the air quality was worse than usual due to a bad land-fill fire. 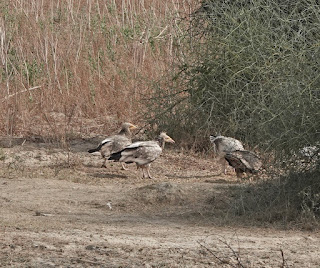 The drive was really nice. We stopped a nice road side shopping center for tea and breakfast. It is funny, I have never been a big tea drinker, but I really enjoyed it in India. Our driver actually knew birds and pointed out Saurus Cranes! That was a life bird for both Willie and me. Shortly after that we had some Egyptian Vultures, another new bird. As we arrived in Agra we had some Bank Mynas, which I had seen at the Delhi Airport when we first arrived, but Willie had not. 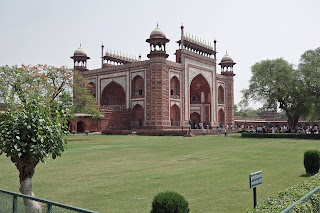 We picked up a private guide, Satendra Jain, who is on Instagram and Facebook, if you need a guide there. We then headed to the Taj. As it was a Saturday, the lines were more than daunting. Satendra got our tickets and we went through the gates. There was a separate entrance for women, so I got through pretty quickly, but Willie and Satendra were not so lucky. The heat was already a bit oppressive. The building pictured above is one of the great gates, which was beautiful on its own. 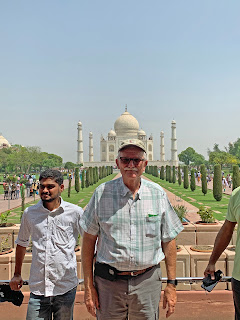 I won't go through all the details, but it was more than impressive. I couldn't help but gasp when we walked in and I saw it for the first time. Satendra was extremely knowledgeable. He explained the huge cost of building it, and described how the intricate inlay work was done. He also told us in detail how the British took so much from the Taj, including jewels and gold. I was kind of glad Martin wasn't there. It was built in the 17th century by the Mughal emperor Shah Jehran as a mausoleum for his favorite wife, Mumtaz Mahal. I had heard for years that there was supposed to be a black mausoleum built for him opposite the Taj. I asked Satendra about that and he rolled his eyes and said it was not true. 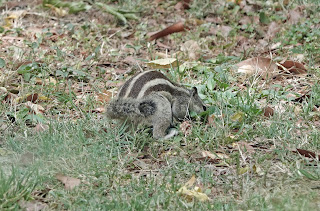 After going inside, where photography is not allowed, we walked around the grounds. There were actually some birds and a cute Eurasian Palm Squirrel. One thing that was really amusing to me was how often people asked us if they could take our pictures. I guess old white people are a novelty! We posed over and over again. The heat was becoming unbearable and Willie wasn't feeling great, so we decided to go. I made the mistake as we were leaving in buying a cheap tacky souvenir for fun. Then all of the hawkers descended on me. Do not do this!

Satendra asked if we would like to go shopping before lunch, and of course we said yes. I had not been able to buy gifts  yet to take home. He asked what we were interested in and took us to a fabulous shop with beautiful Indian clothing. I won't say what I bought, as I haven't given those gifts to my kids yet. I also bought myself a stunning silk tunic. Don't ask me where I am going to wear it, I have no idea! We then went to a place where inlay work in marble is done. They showed us how the tiny pieces of semi-precious stones were cut, inlaid, and finished. It was done the same way the inlay work at the Taj was done. It was fascinating.

We had lunch in a really nice restaurant, and were supposed to go to the red fort in Agra, but since Willie wasn't in top form we decided to head back to Delhi. We also had to do Covid tests online that evening in order to get back to the United States the next day. I am very glad we made that decision as traffic was brutal going back and we probably would have been late for our Covid test appointments. As we were driving through the city, I added one more bird to our list, an Indian Gray Hornbill flew over, right in the middle of the hospital district!

I will be writing a summary of the trip shortly, with my impressions of India, which were extremely positive.

Photos for the two days: