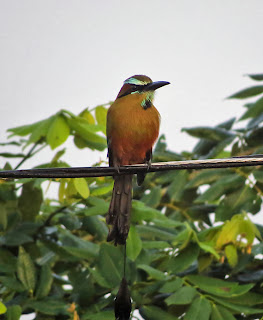 Sunrise comes a lot earlier in the Yucatan than it does in Texas. We thought if we started at about 600AM we could get some night birds. Not so! It was quite light out. There was a tiny cafe across from the hotel, where we grabbed coffee and I picked out a pan dulce from a plastic bag, choosing ones with the fewest ants. After knocking them off, it was really good. We got in the car and took off for Vigia Chico Road, just outside of town.

This 8 km road travels through a variety of habitats, starting with scrubby fields, into nice deciduous forest. Because of this, there is a large diversity of birds along the way. Almost immediately we spotted a Caribbean Dove, sitting on a stone wall under some large trees. I thought we had lost our chance for that species after leaving Cozumel, so I was really pleased. We heard some Black-throated Bobwhite calling; Martin tried whistling them in, but had no luck. A striking Turquoise-browed Motmot was sitting on a power line outside a farm house. Black-headed Saltators were calling. All of this and we had not even gone a half kilometer!

It is always difficult to know what to do. We knew the forest birding was better further down, but it is hard to drive off and leave birds. We decided to press on and drove further. A couple of kilometers down we were surprised to find another birder! We were even more surprised to find out he was from Kent, south of London. He and his wife had attended a destination wedding at Playa del Carmen and he had sneaked off for a day of birding. We joined forces for a while and "ticking" species off very quickly. Brendon, our new English friend, was really happy to have run into us, as almost all of his birding experience was in Asia, Africa and Europe. We got the scope out and scanned some distant trees, finding our first Keel-billed Toucans of the trip.

We all moved a bit further down and we found one of my goal birds, Rose-throated Tanager. That really sounds like a looker, huh? Wrong. They are really dull brown, with yellow under the throat on the females and a bit of rose on the male. We saw a number of these birds, but never a male. Then we found a bird that sounds dull, but is far from it, Gray-throated Chat. This bird is slate gray and white, with an incredible blaze of red down the middle of its chest. Unfortunately, it was very fast moving and I never even tried to get a photo. I was super excited about this, as it was probably my most wanted bird for the Yucatan. There were a bunch of other "color" birds, Blue-black Grosbeak, Gray-colored Becard, Rose-throated Becard, Lesser Greenlet and Green-backed Sparrow.

One of my favorite sounds on this road was the song of the Spot-breasted Wren. Almost all wrens have great songs. This one carried through the woods. It supplemented the song with a great call that sounded like someone running their thumb over a small comb. Northern Bentbills were calling all around us, with a crazy high pitched buzz. We even heard a Thicket Tinamou. There were many other calls that we never able to identify.

We went back to town for lunch and a little siesta. We planned on some after dark birding, so we wanted to be prepared. We drove back out on the road, dodging a few rain showers. We saw more mixed flocks and I photographed a few butterflies and a spectacular white, black and red day flying moth. After the sun set we started actively looking for eye shine on the side of the road.  We also listened intently. Our two targets were Yucatan Poorwill and Yucatan Nightjar. We finally saw a dot of red on the side of the road. We creeped up, and a bird flushed up in front of the car. Unfortunately, it had a long tail and white in the wing and tail, a Common Paraque. Then we heard a distant "will" call, the Yucatan Poorwill. That gave us a bit of hope. We continued cruising and spotted more eye glow, but it looked odd. As we came up we discovered it was a moth! The eye was large and reflecting red, just like a bird. None of us had ever seen anything like it. Finally, we saw more red eye, and found our Poorwill! We looked some more for the nightjar, but had no luck. Coming back into town we did have one more surprise. A Northern Potoo, one of the weirdest looking night birds in the tropic landed on top of a pole right in front of us. I tried to photograph it, but only got a weird shot that looks like a light on top of a pole.